Almost every month, IndustryEdge is asked why it tracks woodchip vessel movements, especially into and out of Australia. After all, you rely on formal trade data for many of your other data sets. True we say, but the difference with woodchips is that there is often no formal trade data available. How could that be? After all, there are essentially a small number of large vessel movements each month. It cannot be too hard for them to be included in the formal trade data. That also is true, yet still, there are long periods when there is no formal data available.

In the last year, key woodchip export data has been redacted by exporters – first for hardwood and most recently, for softwood

The following outlines how this happens, why it occurs, and how IndustryEdge deals with the situation, to provide its clients with the data they need to conduct their businesses.

How trade data can be redacted

Every export and import to Australia (and pretty much every country) has to be reported to a Customs agency like the Australian Border Force. That happens for woodchip exports. The data goes from those agencies to national statistical agencies like the Australian Bureau of Statistics (ABS), who publish the data in many different forms. The team at IndustryEdge pours over that data, on an ongoing basis, producing datasets, charts, reports and so on for clients.

But, Australia is one of the few countries in the world that retains a relic of colonialism in its trade laws. The relic allows parties engaged in a trade to have some of the details (and occasionally it is all the details) of the monthly transactions redacted under what are called ‘confidentiality restrictions’. The details are available here, but effectively an applicant requests that the trade be made confidential on commercial grounds and usually data will be redacted, for a set period before a review. Usually that is one year. The type of data that is often redacted will be the country of origin, the port or state of despatch and so on.

As would be appreciated, for a firm engaged in data and market analysis, searching for insights we can provide, IndustryEdge finds the use of confidentiality restrictions frustrating.

What does all that have to do with woodchips?

Woodchips are a little different to goods that are shipped into and out of Australia in containers, on vessels carrying goods from many companies, with multiple arrivals and departures from most states, each month. Woodchips are shipped in bulk, with often a single vessel leaving a port and going to a destination port each month. When the full trade data is available for woodchip exports, the data shows the port of despatch, the port of delivery, the volume (in bone dried metric tonnes) on the vessel and the value of the shipment, from which the price can be derived. From Australia – the second largest chip exporter on the planet after Vietnam – there might be just 15-20 vessels leave per month.

For woodchip exports, that means everyone with an interest can interrogate the full data – when it is available – and immediately see many of the pertinent details between a single seller and a single buyer. The trade is not just transparent, it can be utterly exposed. Of course, that exposure can run counter to the commercial interests involved.

As a result, there have over the last two decades, been long periods where the woodchip export trade data has been redacted. In most cases, this has meant the only data available was the total national export volume, and the total national average price, by species, usually with the port and country of destination still available. For hardwood chips in particular, that has more than adequately masked specific pricing and other details.

Some will say that is fair enough then, and for the most part, IndustryEdge would be among those who say they at least understand the reasons for it.

Despite that, IndustryEdge’s clients – including the exporters themselves in most cases – want to see as much data as possible, so they can understand the market as best as possible.

How IndustryEdge uses vessel tracking to ‘rebuild’ the market

That is why IndustryEdge developed its approach to vessel tracking, presented on the visualisation platform Wood Market Edge online. Vessel movements are updated twice weekly to show the latest data. Below is a static example displaying the woodchip ships that have arrived or are enroute to particular ports, over a given period of time. Clients dial in their parameters to address their specific needs and can download the charts and data. They can be as broad or as specific as they need. 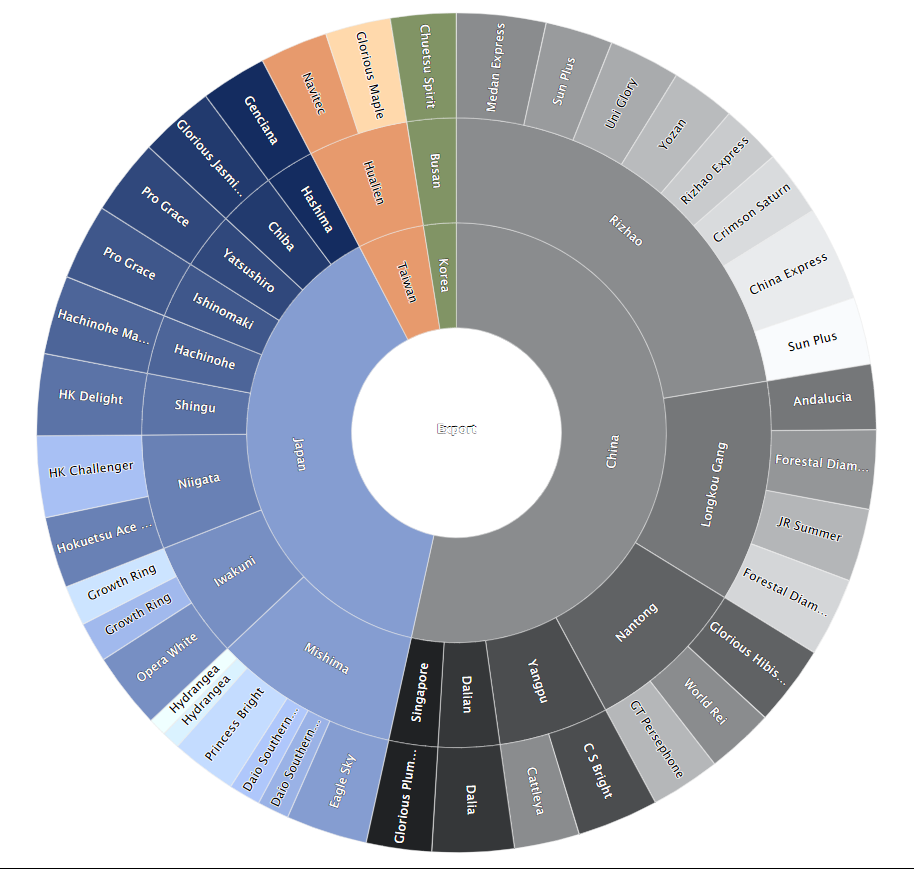 When IndustryEdge introduced the vessel tracking in mid 2013, it soon became apparent that the new data provided MORE information that the redacted formal trade data.

Most important was that so long as it was updated every few days, the vessel tracking data provided more-or-less real time woodchip export information. The formal data, by contrast, can be up to ten weeks behind a vessel actually sailing. In turn, the vessel tracking data allowed IndustryEdge to make estimates of the upcoming month’s formal data. Over time, based now on close to 2,000 vessel movements, the average difference between the IndustryEdge estimate and the actual reported total is just 3.5%.

IndustryEdge would be very happy if the margin was just 3.5% each month. The range however goes from ‘very, very close’ (where the estimate and the actual are so close they are 0.0% apart) to ‘wide’ (where the estimate and the actual have been as far apart as 23% for a given month). As more observations are added each month, the average margin tightens, but there are still occasional ‘outlier’ months.

Recently, IndustryEdge asked itself why its monthly estimates were out by these margins, in some months.

There are a few reasons. Occasionally a vessel is missed – usually a vessel that has not carried woodchips before.  Also, IndustryEdge adds the biomass shipments for example – not strictly woodchips, but not far from them, at the same time. Additionally, some vessels – curiously – do not record their presence through port records and occasionally, one of those is not picked up by AIS or satellite tracking.

However, what IndustryEdge found most recently is that the two months in which redactions occurred – September 2020 for hardwood chips and June 2021 for softwood chips – saw the largest tracking errors, and as has been the case since the tracking commenced, the larger margins all see more exports than estimated, because vessels have been missed.

In the chart below, IndustryEdge has tracked its vessel tracking estimate against the actuals. The red boxes show the two significant redaction events, which, as outlined, coincide with the widest margins. 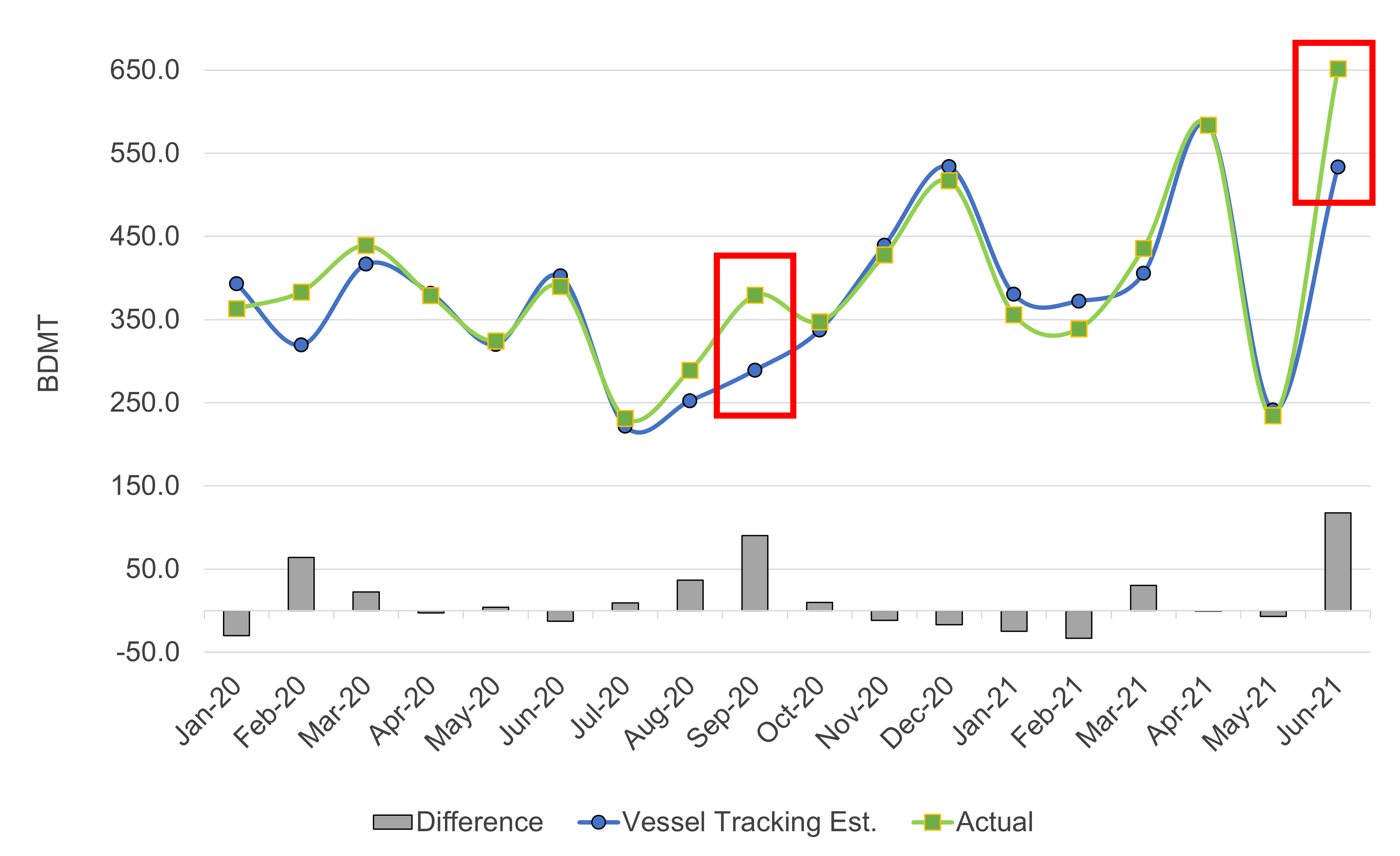 IndustryEdge would prefer its vessel tracking to be a supplement to the formal trade data. The repeated application of confidentiality restrictions means the vessel tracking is all the more significant and necessary in understanding the trade in woodchips. For its part, IndustryEdge understands the reliance placed on this data by its clients. That drives the effort to ‘find’ every vessel, no matter the challenges that confidentiality restrictions present.

If you or your team need to understand woodchip markets, or any other aspect of Australia and New Zealand’s wood markets and trade, contact IndustryEdge for an online demonstration of the Wood Market Edge online platform.