Australia’s exports of OCC recovered paper (Old Corrugated Containers) plunged 21.0% in 2018, falling to 710.2 kt compared with 2017. The fall in exports of 188.6 kt is directly attributed to the much-discussed Chinese restrictions on imports of lower quality recovered material.

As recent news out of Victoria reminds us, the crisis has yet to pass. The nearly 200,000 tonnes of recovered material that is not being exported has to go somewhere. Local EPAs have had enough and are requiring collectors to reduce their stockpiles – of all recyclates, not just fibre. The result is increased landfill.

However, the Chinese prohibitions primarily impact the Mixed or Unsorted grades of recovered paper that are collected via Council kerbside collections. Industrial volumes, especially related to OCC

The chart below shows Australia’s monthly OCC exports, by state, for the last two years. Included is the three-month moving average export volume. 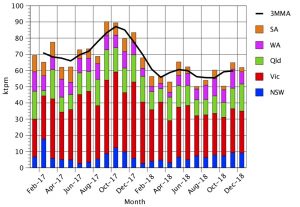 From peaks around 90 kt per month in September and October 2017, total OCC export volumes plunged to as low as 51.2 kt in July 2018, before they have recovered to average just below 60 kt per month for the second half of 2018.

Victoria remains the primary export location, but includes volumes from South Australia. Volumes from New South Wales are lower because it is the only state in which both Orora and Visy manufacture recycled paperboard.

The new stability is essentially for a higher-value average OCC product than was previously supplied. The more contaminated, lower-quality material simply cannot find a home. To achieve the quality requirements, double-sorting and other techniques are being used by exporters. Their price experience has, as a result, improved significantly.

The table beneath, shows actual US dollar prices per state.

It can easily be observed that there is a wide range of prices in play for Australian OCC exports. The one consistent feature is that all prices are higher, with the exception of the stable price for supply from South Australia.

The big lift in the average price of Victorian supply is an indication that it is likely the state that faces the greatest challenge with material that can no longer be exported. A year ago, it could export the additional volume, albeit at a lower price. Now, the volume data shows its shipments down around 93,000 tonnes per year.

OCC export volumes might have stabilized, and prices may be strong, but that does not address the sometimes literally burning question – what are we going to do with the remaining, growing volume?

This item was originally published in Pulp & Paper Edge in February 2019.