Unintended consequences: How being shut out of the US market has worked for Australian packaging producers

Australia’s exports of Kraftliner and Corrugating Medium to the USA were wiped out in the September Quarter, because of the trade dispute between the USA and China.

The collapse in exports to the USA comes despite the Australian dollar trading lower against the US dollar, providing US buyers with significant price advantages when buying Australian product.

Meanwhile, shipments to China continued, as the chart below shows. 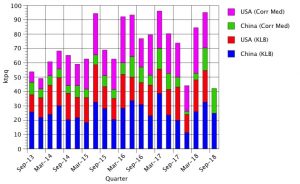 In SQ’18, Kraftliner exports to China totalled 24.8 kt, up almost 25% on SQ’17. Corrugating Medium exports were up more than 150% over the same period, totalling 17.3 kt. While these are strong numbers for exports to China, the big quantity story is the absence of exports to the USA.

How is this connected to the US – China trade dispute? It is a simple set of flow-on effects. The box below shows our understanding of how this situation evolved.

This appears to be a further unintended consequence of US producers needing to find alternative markets, after being frozen from the Chinese market.

You might expect the local producers would be howling about the decline in exports, but that is not currently the case, for three reasons. First, there were some large and long maintenance shuts that reduced production over the quarter. Second, we are advised the domestic market remains very strong and inventories were low, a situation now seemingly rectified.

Third, and of greatest interest, average export prices to China have sky-rocketed to record levels.  The chart below shows the details. 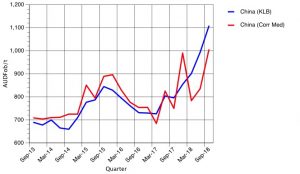 The situation is similar for Corrugating Medium, exports of which to China were priced at an average AUDFob1,004/t in SQ’18, up 20.2% on the June Quarter and 33.9% compared with SQ’17.

The current situation may suit the local packaging producers, but its continuation would begin to bite relatively quickly.

The problem for local producers is that whether good or bad, the unintended consequences of such a trade dispute are largely outside their control. That means uncertainty reigns, and when conditions are uncertain, households and businesses typically reduce their spending.

Right now, it is difficult to see whose interests are being served by the US-China trade dispute.

* Non-tariff barriers refer to non-financial measures introduced to restrict trade. These include onerous inspection requirements, unloading delays, random application of new requirements and so on.

This analysis was first published in the monthly Pulp & Paper Edge, a subscription intelligence publication from IndustryEdge.