Australia’s standard stamp price will rise 10% in 2020. The price is already 25 times higher than when Australia went decimal. In an all too familiar development, the price of sending a standard letter will rise 10% from $1.00 to $1.10 from the start of 2020.

The price rise, which will be the first in four years, caps a decade that has seen standard stamp prices double in Australia. Back in 2009, sending a standard letter cost just 55 cents, but look back to the start of decimal currency and we can see that a standard stamp cost only 4 cents!

Rising operating costs are often difficult to manage, but as industry lobbyists have pointed out, this increase could not have come at a worse time for the paper, printing and related industries.

The chart below shows the growth in the price of a standard stamp in Australia since 1966. 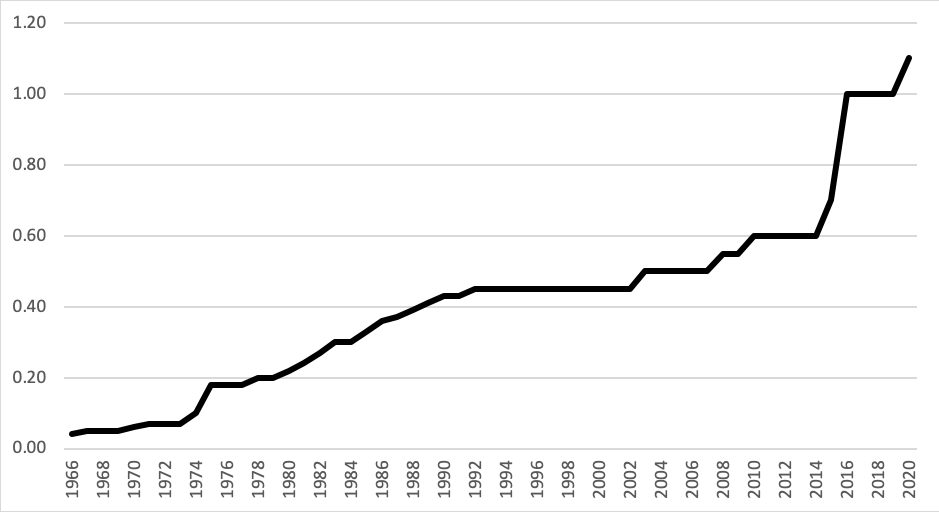 As the chart shows, stamp prices are managed, if not ‘curated’ in Australia, as much as they are in other jurisdictions around the world. 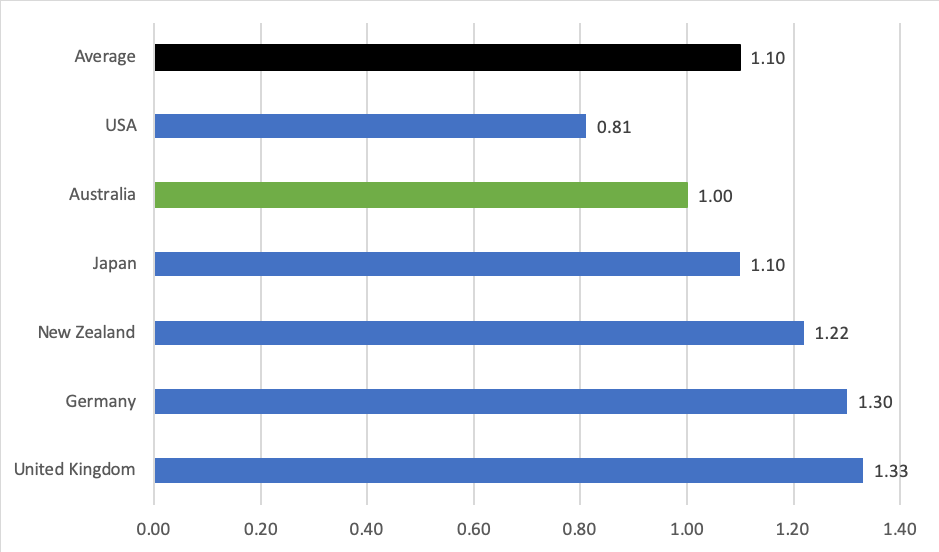 If there is one point to note in the comparisons above, it is that while the range of stamp prices looks close, it is in fact quite broad, ranging from 26% below the average (USA) to 21% above the average (United Kingdom). This differential might imply different cost structures, but it is just as possible it implies different social and political decisions about the importance of stamps.

In Australia, when indexed against inflation (the Consumer Price Index [CPI]), since the early 1970s, the price of a standard stamp has grown faster than the rate of inflation. Initially, and for close to thirty years, the price differential was largely consistent with the inflation rate. However, that changed in 2015, when the standard stamp increased in price from 60 cents to 70 cents (a 17% increase) and again in 2016 when the price sky-rocketed to AUD1.00 (a 43% increase).

The price of a stamp is nearly twice (187%) what it would be if it had followed inflation price rises only.

But we also know that wealth disparity is rising in Australia. Those whose incomes have not grown so much – including those like the elderly who rely on stamps and mail – may find the impost on them is significantly higher than for the nominal  ‘average’ household.

The issue for those in the paper and print industries is that stamp prices are increasing at such a rate they are contributing to the decline of posted mail, at a time when posted mail faces a near existential crisis.

Letter deliveries in Australia continue to fall, with Australia Post stating it expects to deliver around 2 billion letters in 2019-20. That number has been forecast to decline by between 9 – 10% per annum thereafter. That is serious in its own right, but the other factor weighing on the postal delivery system is that the number of ‘delivery points’ (households and businesses mainly) is growing.

The chart below shows the declining number of total deliveries (including parcels) by Australia Post, compared with the number of delivery points or places to which it must deliver. Data was only available back to 2003. 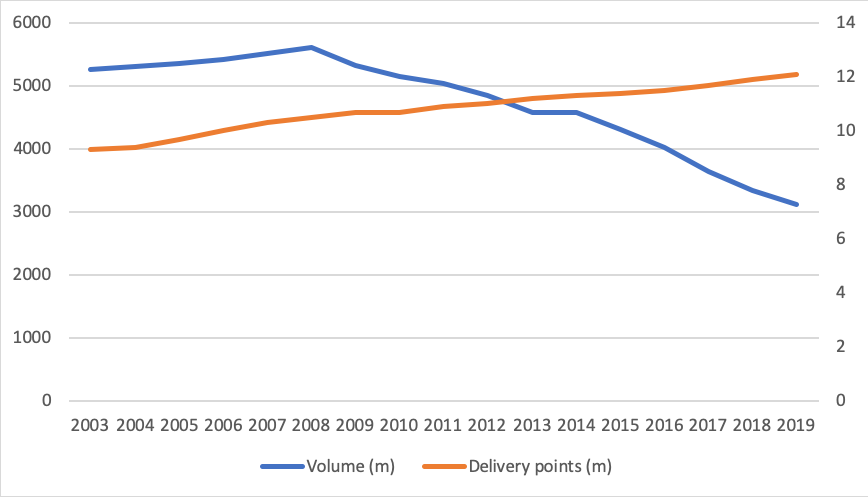 The table below shows that over the last decade, the volume of items delivered by Australia Post has fallen an average 5.2% per annum. Specific letter data is not available, but we know Australia Post’s parcel deliveries are growing, so the decline of more than two billion items per annum is entirely related to letters (and then some). At the same time, the number of delivery points grows around 1.2% per annum.

Future prices for stamps and standard letters are uncertain, though they will be higher. What makes them uncertain is that price is determined by a wide range of factors, including broader social and political considerations.

That is a limitation on forecasting a future stamp price. We can however run a series of mathematical forecasts that are not adjusted for any policy prescription. The chart and table below provide forecasts IndustryEdge has calculated, using all of the data from 1966 to 2020.

IndustryEdge’s view is that this long run data and only the Upper Confidence Interval (+5%) displays the minimum price increases for stamps in Australia.

The data from years through to about 2015 significantly diminishes the future impact of the more recent years, which is shown in the Lower Confidence Interval (-5%) suggesting stamp prices will fall. They will not.

Although we have not displayed it here, the ten-year price forecast is particularly grim for stamp prices.

What that tells us is that the future of stamp prices in Australia has a little to do with previous pricing, but a lot to do with whether the nation continues to value postal services as part of our national communications toolkit.

This item is an edited extract, it was first published in the November 2019 edition (Edition 170) of Pulp & Paper Edge.