The value of Australia’s monthly recovered paper exports hit a thirty-two month high in July, as the monthly average export price was the second highest on record at AUDFob257/t.

On export volumes that reached 92.1 kt, the total value of exports was AUD23.665 million for the month. In turn, the monthly result fed into annualised exports striking an eleventh successive month of increases, with annual value at AUD219.680 million for the year-ended July 2021.

As we continue to advise, each month, the prior month’s export figures are routinely being revised downwards as Customs Declarations and other shipping documents are reviewed.

Strong international fibre markets are still being experienced, despite some seasonality. The weakening of most pulp prices over the last two months appears not to have flowed through to the recovered fibre market by July, although exporters from Australia report some softness in their August and more recent transactions.

Indonesia received 57.2 kt of Australia’s exports in July, or 62% of the total. It might have been anticipated that a rapid and large swing from a mainstay destination like China would have resulted in falling prices as exporters struggled to find new markets. That has occurred with other resources and commodities – including logs for instance – that are excluded from the Chinese market, albeit for different reasons.

However, the rapid growth in exports to Indonesia has coincided with what can only be considered a boom in recovered paper pricing. There is some coincidence in this, but the underlying value of all resources plays out over time.

In addition to price, this is reflected in the stability of total exports, especially on an annual basis. At 1.057 Mt year-ended July, exports are a comfortable 3.3% higher than a year earlier, having rolled through a very tight band of annual total exports over this most disrupted year. 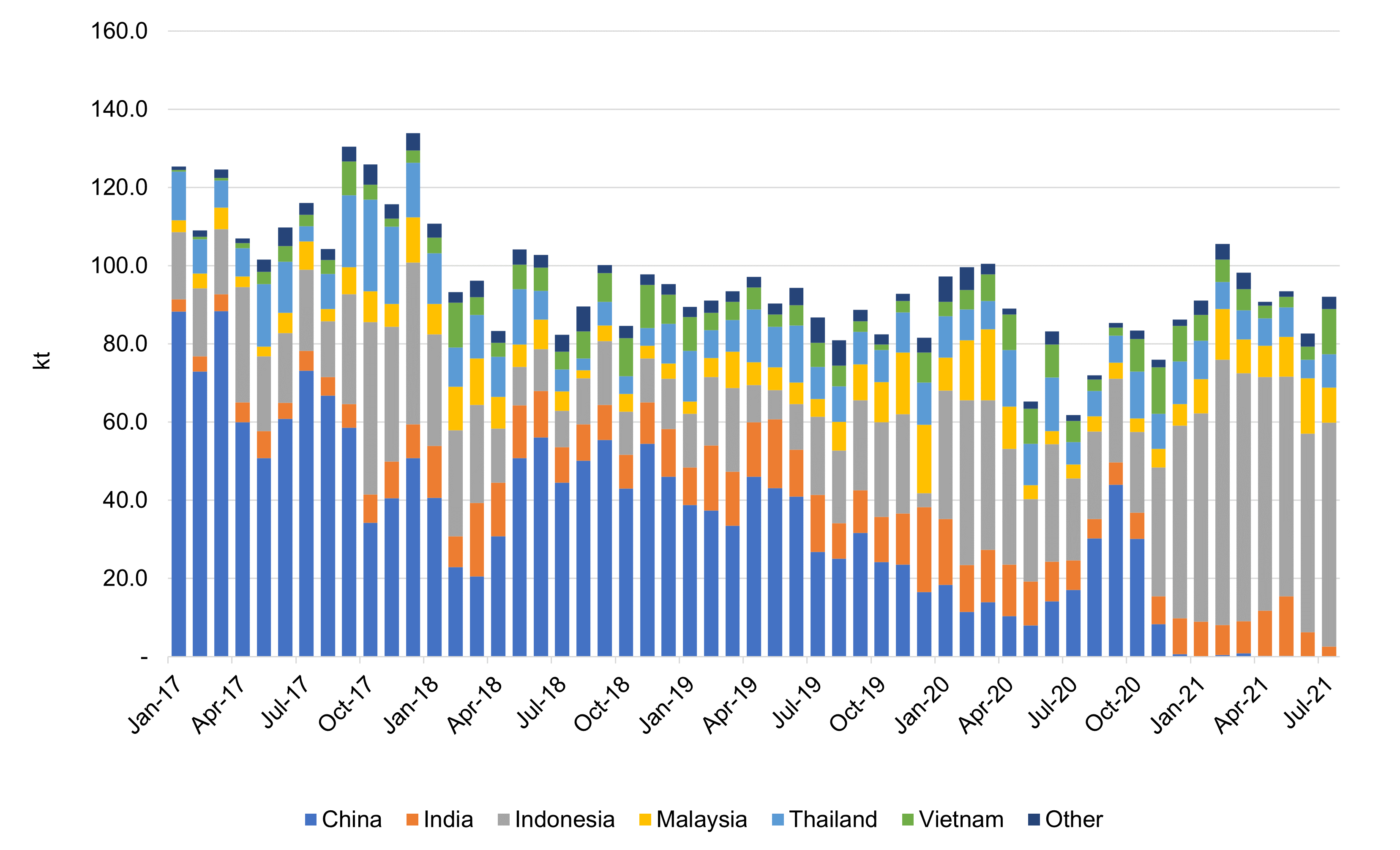 Examined by grade, as the chart below shows, Australia’s recovered paper exports remain a race in two: between OCC (Old Corrugated Cartons) and Unsorted material, most of which is derived from the kerbside collection stream.

As we routinely report, exports of Bleached Chemical (Office White) and Mechanical (ONP and OMG) have all but disappeared from the export market. In both cases, domestic demand for the recovered material far outstrips supply, from the recycled office paper sector, tissue producers, manufacturers of moulded fibre products and from the kitty litter manufacturers. 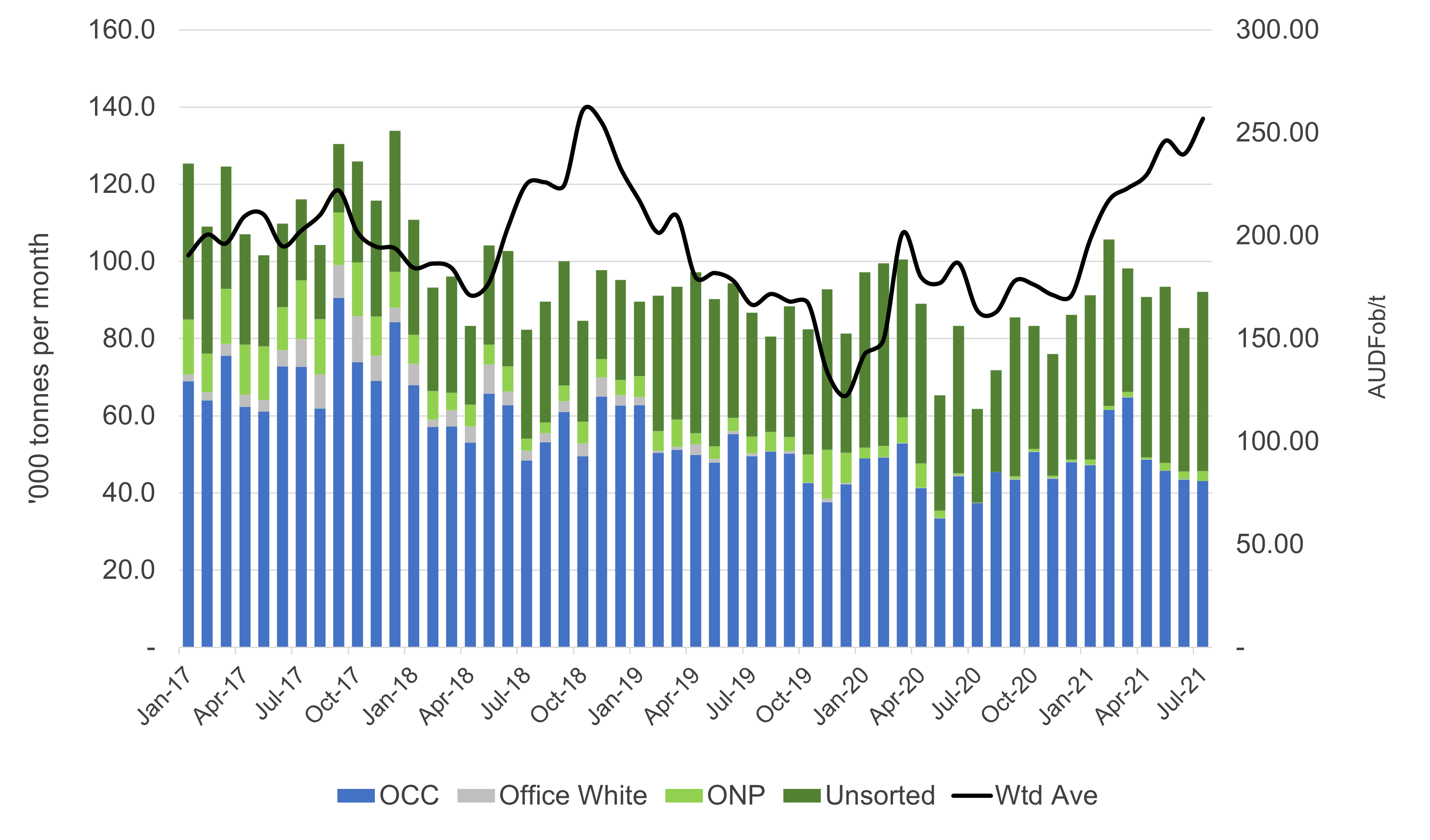 State based exports continue to be dominated by Victoria, which has less reprocessing capacity than NSW. Despite this, the notable contraction in exports from Victoria is of interest, amounting to around 50,000 tonnes less exports on a year-on-year basis. We anticipate that is a result of some increased processing and potentially a marginal reduction in collections. We are examining this situation with market participants and will address this in more detail in future briefings. 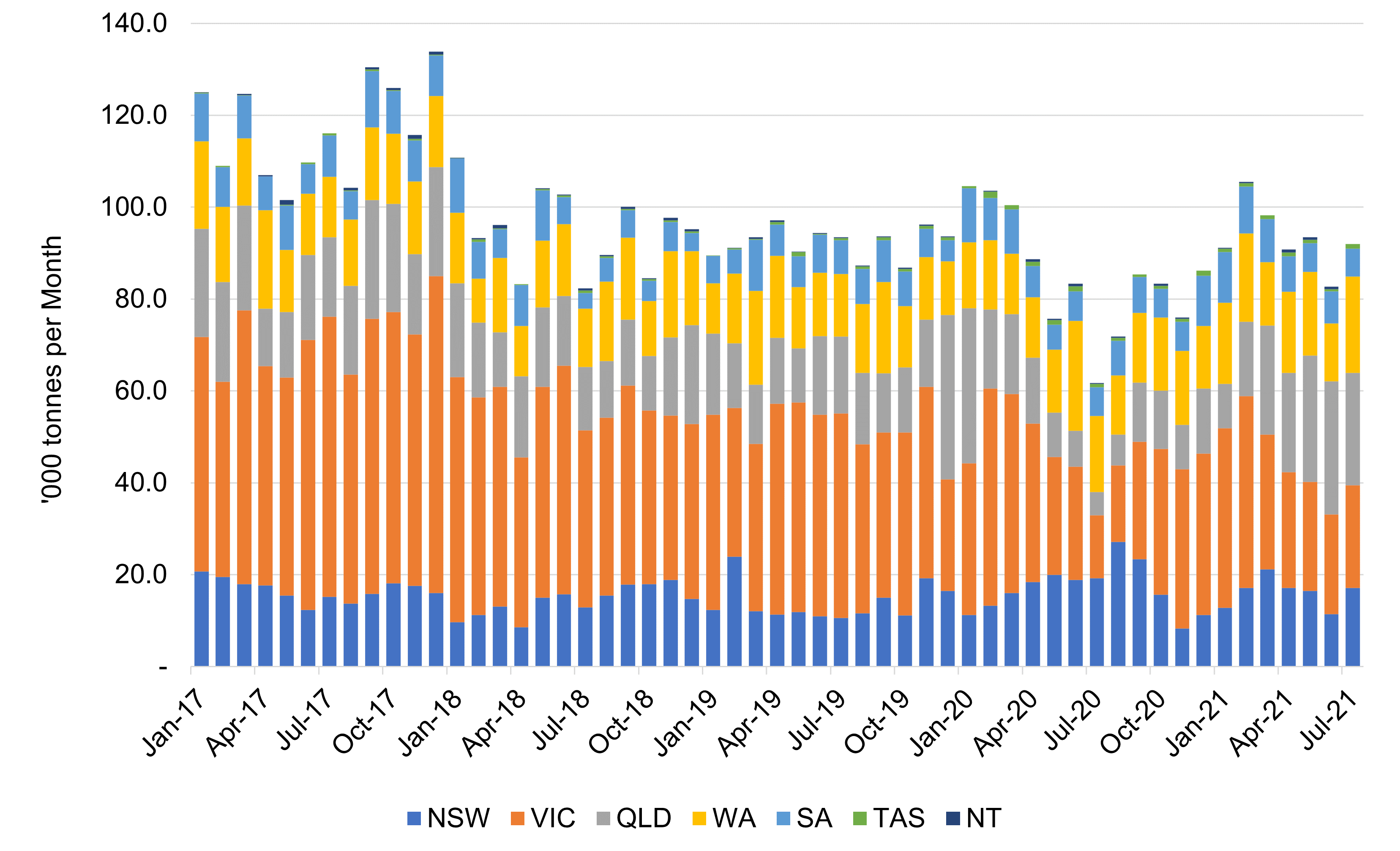 This is an edited extract from an item that first appeared in the September 2021 edition of Pulp & Paper Edge (Edition 195).