Global recovered paper markets are operating under intensifying pressure as 2019 comes to a close. Exports for the year to the end of October totaled 1.110 million tonnes, down 7.2% on the prior year.

All indications are that the softening of global economic conditions and of Chinese manufacturing in particular, is flowing into slowing demand for packaging materials. In turn, that is placing pressure on raw material inputs, including recovered paper. Australian suppliers are reporting that quality and contamination challenges are now being compounded by demand side pressures that have seen pre-Christmas volumes and prices slump.

The impact on the export supply chain is currently severe, especially for those exporters obliged under ‘take or pay’ arrangements to acquire the recovered paper at a fixed price.

As the chart shows, exports of the main grade – Unbleached Kraft or Old Corrugated Containers (OCC) declined 11.4% over the year-ended October. However, in a signal month, exports of the grade fell almost 15% compared with the prior month, falling to 44.6 kt. This was the lowest level of monthly OCC exports since May 2016. 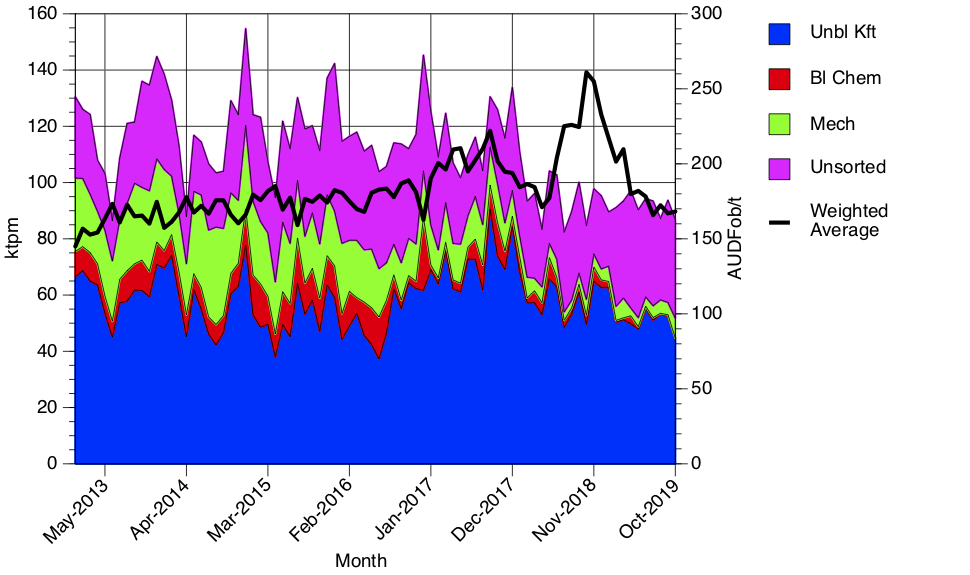 Exports of the Bleached Chemical (white office paper) volume have slowed to near nothing, down 64% on a year earlier at just 17.2 kt. That small volume is significantly higher priced than a year earlier. Prices averaged AUDFob362.85/t in October, up 31% on the prior year. Only the best material is being exported.

Mechanical exports (made up of Old Newsprint [ONP] and Old Magazines were 21.5% lower at 56.2 kt. The average price is 57% lower than a year prior, at just AUDFob156.74/t. Given the fees known to be paid to suppliers back in Australia, several exporters of this grade are losing money on every tonne.

‘Other’ recovered paper, derived from kerbside collections and products that do not fit into the other three designations, has experienced increased imports over the last year. Imports totaled 390.1 kt, a rise of 12.3% on the prior year. This rise indicates the quantity of recovered paper exports that are being ‘downgraded’ rather than an increase in demand for virtually unsaleable kerbside recovered material. The average price of the ‘Other’ grade declined 21.3% compared to a year earlier and in October 2019 was AUDFob188.97/t.

The total average recovered paper export price has slumped almost 36% from an average AUDFob260.97/t one year ago, to AUDFob168.16/t in October. Initially, lower volumes of exports saw average prices rise. That was because only better quality (and therefore higher priced) material could be exported. The quality requirements have continued, and at the same time, the average price has progressively declined.

It is a perfect storm in an utterly disrupted market.

This item first appeared in the December 2019 edition of Pulp & Paper Edge (Edition 171).