Read All About It! Recycle that newsprint any way you can

Australia’s ability to collect recyclables remains world class, as the latest newsprint recovery analysis demonstrates. In calendar year 2018, more than 153,000 tonnes of newsprint was recovered, amounting to 74.1% of total consumption.

The recovery rate was down 1.3% on the prior year, underscoring the difficulties in all markets for recyclables over the last year.

Over the course of 2018, the following significant market events and factors influenced the recovery rate:

Despite the challenges, as the index chart below shows, Australia’s recovery of old newsprint (ONP) has been relatively stable over the last decade, while the consumption volumes have fallen sharply (more than 70%). 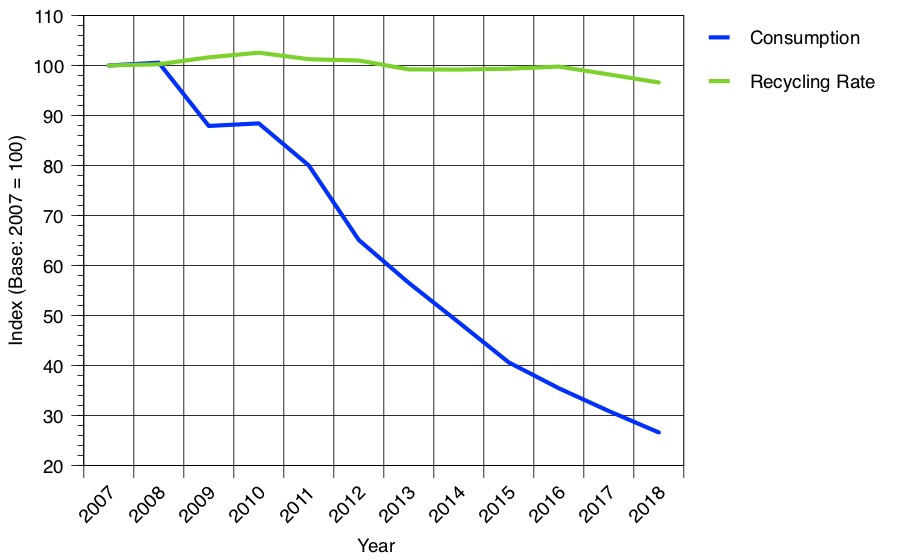 How the states fared

Where recovered ONP is used

The major domestic end-uses of recovered ONP remain in the manufacture of corrugated packaging (29.7 kt in 2018), in recycled newsprint (25.4 kt) and in the sometimes surprising sectors of kitty litter, soil stabilizer and similar (21.9 kt) and moulded fibre (6.0 kt). Export remains the largest end-use (70.6 kt), with supply into both paperboard and recycled newsprint production. The chart below shows the last decade’s proportional use of the recovered volume.

What the future holds

ONP recovery above 70% is equivalent to world’s best outcomes and is indicative of programs that are world’s best practice.

Because of the geographic dispersal of the Australian population and the other structural changes described above, Australia’s ONP recycling rate is modestly lower than a small number of countries which have more concentrated population centres and which employ waste to energy plants.

With the policy settings beginning to shift towards energy from waste in Australia, there is the potential to increase the utilisation of contaminated newspapers in particular. This may work to maintain, or even increase, Australia’s newspaper recycling rate.

The research, conducted by the IndustryEdge team for NewsMediaWorks for two decades, charts a long course of success for the industry operated program to recover its on fibre. It helps of course that the mechanical fibre is valuable and has ready applications both in Australia and internationally.

Our team was supplemented by the expert support of Steve Balmforth & Associates.