The price of OCC (Old Corrugated Cartons) exported from Queensland collapsed in April, despite solid volumes being exported.

Queensland’s total recovered paper exports for April amounted to 23.3 kt, just marginally lower than the prior month in what has been an improving trade since the middle of 2020, as the chart below shows.

Significantly, the OCC volume (shown in blue bars) always dominates the State’s exports. As an example, in April, OCC accounted for greater than 96% of total RCP exports for the month and more than 73% over the year-ended April 2021.

But in many respects, that is beside the point because the real point of interest is that in April, Queensland’s Weighted Average export price for RCP collapsed 54% to just AUDFob87/t, from the previous month’s AUDFob187/t.

Here we interrogate the data to understand and explain this situation. 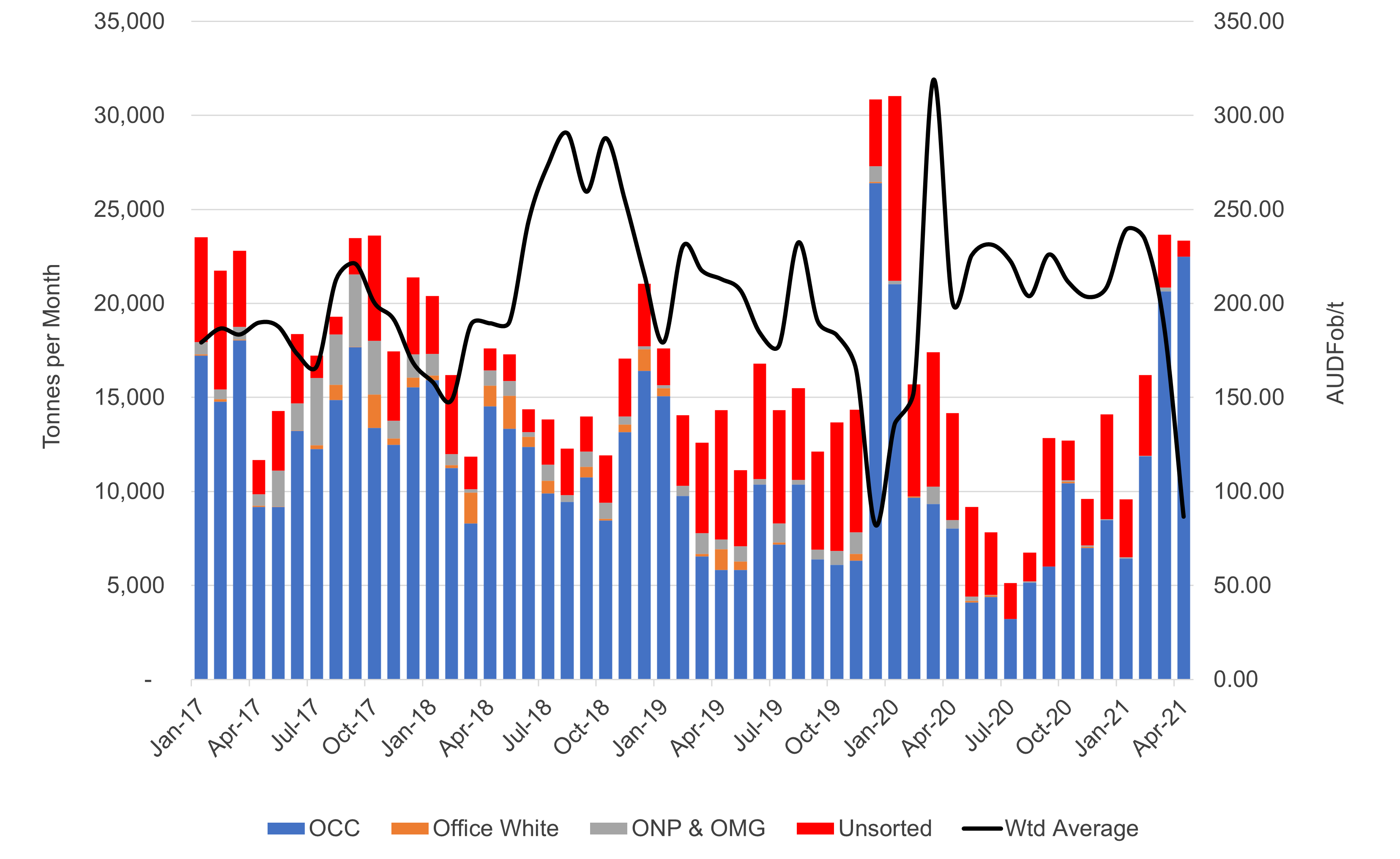 As the table demonstrates, over the year-ended April 2020, Queensland’s exports of recovered paper totalled 150,905 tonnes, down 27.1% on the prior year. That is pretty significant as a decline, because it should not be assumed that collections reduced. Indeed, they are likely to have altered their pattern (from Commercial & Industrial to Municipal & Kerbside) as a result of the pandemic, but the volumes are not likely to have altered significantly. Much more material was diverted to landfill and some to storage, it seems.

IndustryEdge has observed – and this data appears to support this – that OCC exports will be more resilient because there is a guaranteed international market for this material. Local processors will; where they are able to and it makes financial sense to do so; export OCC and process Unsorted grades that are cheaper and have less reliable export opportunities.

However, over the year, the total annual Weighted Average price of all exports lifted 11.2% to AUDFob195/t, up from AUDFob175/t.

Because we know OCC dominates exports, it is instructive to examine specific grade pricing to see where the April 2021 Weighted Average price slump has come from. Unsurprisingly, as we can see below, the blue OCC line turned sharply down (AUDFob78/t in April), while the red Unsorted line turned up (AUDFob302/t). Note there were no exports of Office White or ONP/OMG in April. 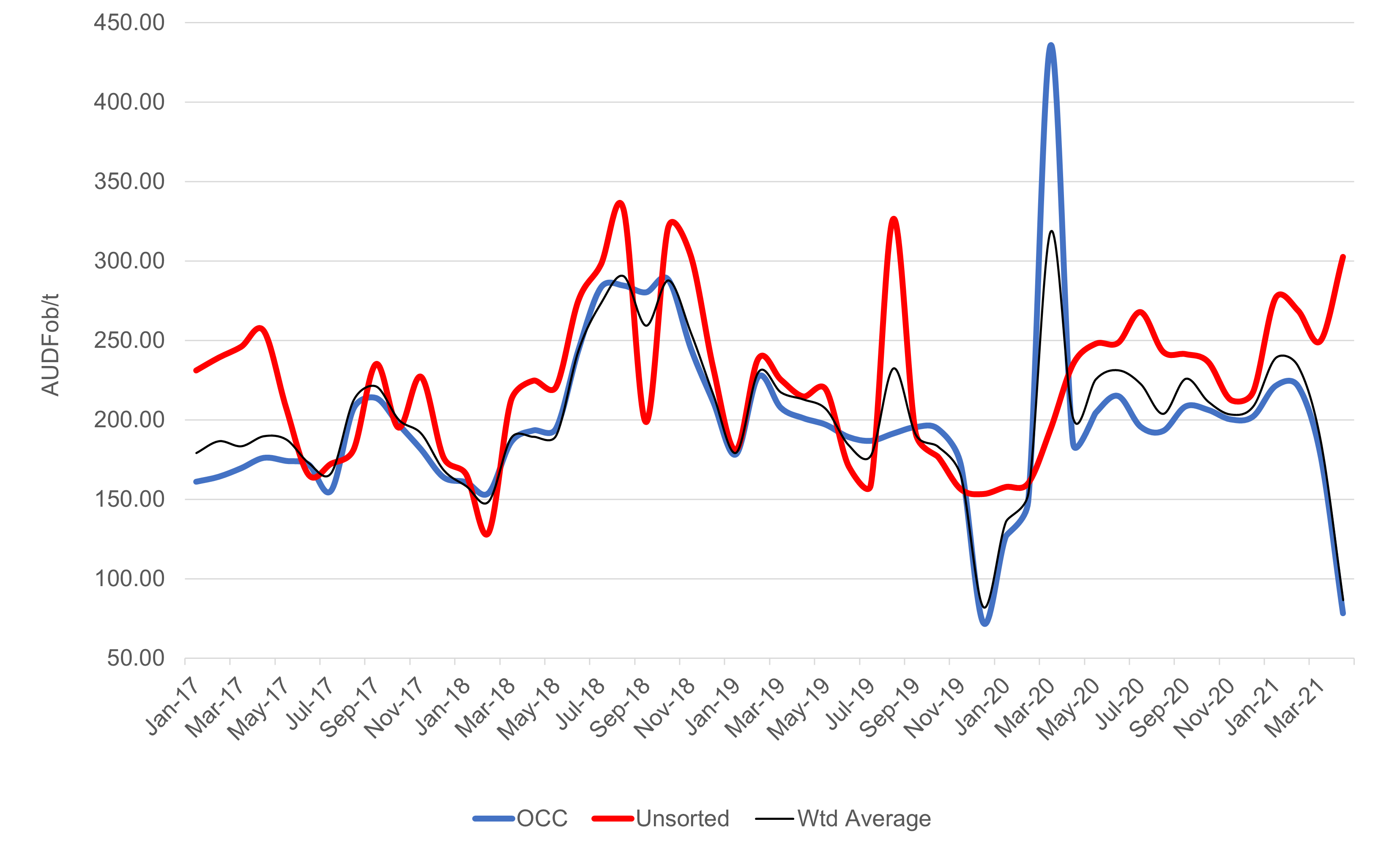 Drilling a little further into this analysis, we also want to examine the OCC exports in detail? Where was the cheap OCC export volume shipped? The chart here shows Queensland’s OCC exports by main country.

Of course, the first observation is that China’s exit from the market is apparent and now absolute. The second point of note is that like much of Australia’s recovered paper supplies, Queensland’s OCC exports are heading to Indonesia, having increased more than five times the previous year’s shipments. Also notable are shipments to Malaysia, where a number of major Chinese packaging manufacturers have invested to build capacity to ship packaging materials back to China.

Having confirmed that all of the growth in the last year has been to Indonesia, finally we can examine the OCC export prices for the main countries in the chart and table here.

Despite the expectation that Indonesian exports dragged the OCC price down in April 2021, we can see that the entire trade was ‘crashed’ for the month. The average export price (AUDFob78/t) was bested by Indonesia (AUDFob108/t) but absolutely pole-axed by Vietnam (AUDFob15/t) and Malaysia (AUDFob14/t). 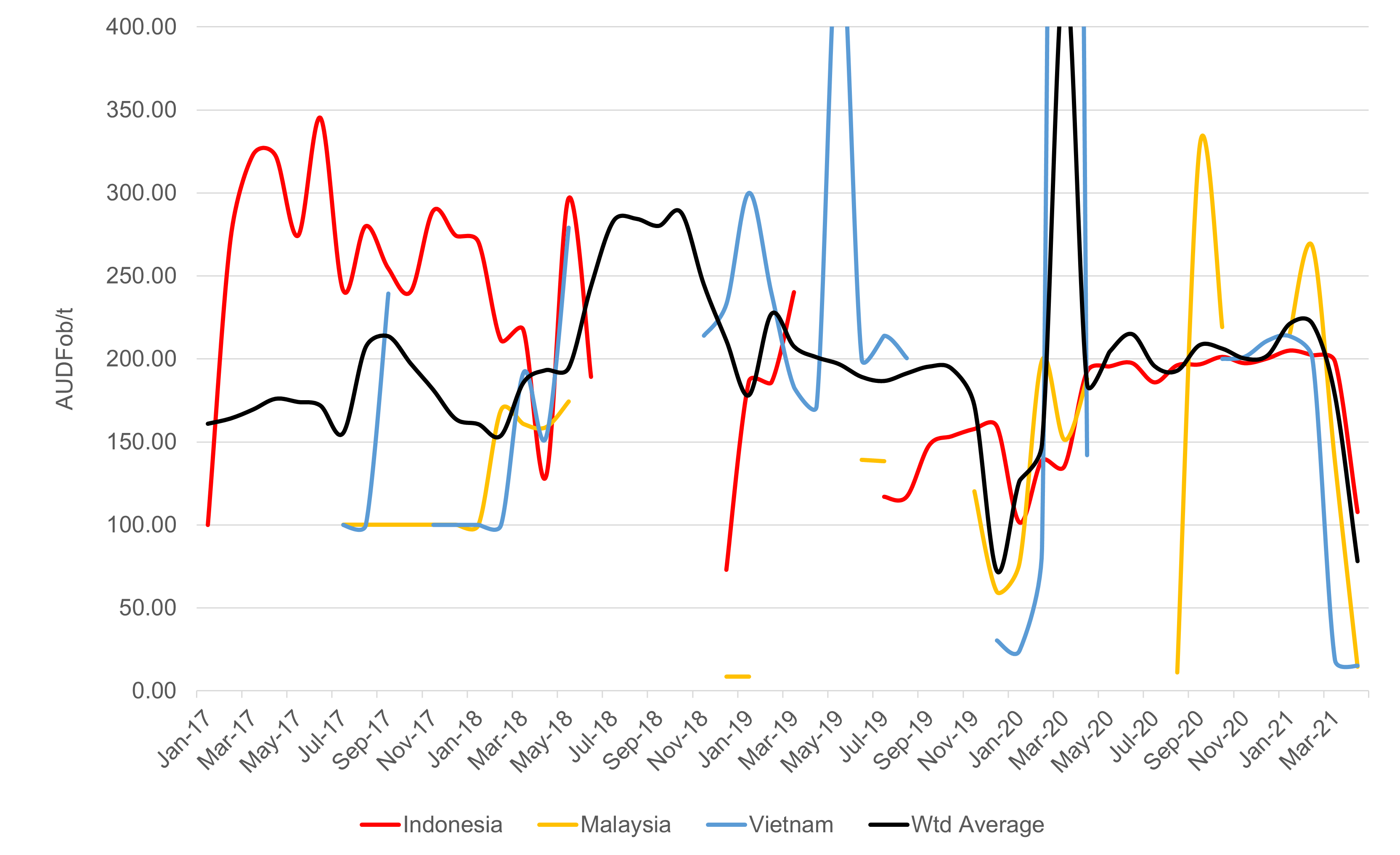 The prices of Queensland’s exports of OCC in April 2021 are ridiculous on average, unsustainable to the main recipient, Indonesia and absolutely absurd to the other main recipients, Malaysia and Vietnam.

IndustryEdge does not have look through to the thinking behind these transactions or how they are constructed, but we have interrogated the data on a line by line basis and we can confirm that these very low prices have occurred before – the chart points to that in fact if you look closely. The final chart here also shows a number of instances where the average export price is exactly AUDFob100/t.

Correct and accurate recording of actual export volumes and prices is important for a variety of reasons.

Not all the transactions we have analysed are uniform, some, like most of those to Indonesia in April, are just very low priced. Others, like those to Malaysia and Vietnam, well, they are just not believable.