Chaos at Port Botany, assertion of market power by global shipping companies, an industrial dispute, and ‘disastrous’ container handling conditions in Sydney have been brought to a head with a new series of port congestion surcharges at Australia’s second busiest port.

The USD285/TEU (AUD388 or NZD390) charge being levied on a ‘temporary’ basis with effect from 17th September adds an estimated AUD20/t to shipping costs for most containerised freight. Some reported fee increases are at USD300/TEU.

The additional charge was announced by ANL/CMA/CGM, following on from a similar announcement just a day earlier by MSC. But those involved in importing and exporting through Port Botany advise that far from being the first cost escalation associated with the port of Sydney, it is just the latest addition to a situation that is now close to out of control.

The broader situation sees container parks jammed with empties, with most companies we have spoken to suffering additional costs associated with re-directions, holding and other transport costs. As the Freight & Trade Alliance wrote to its members:

“Incredibly, shipping lines continue to refuse to implement blanket extension container detention periods despite being at a loss themselves on what to do with the surplus containers that they have failed to evacuate.”

So, to be absolutely clear about this, the shipping companies cannot remove empty containers and are charging their customers for ‘retaining’ them because their container parks are congested and their customers are physically restrained from returning them. Adding insult to injury, their argument appears to be that because Port Botany is congested, their customers must pay for that also!

Little wonder the F&TA has asked the competition regulator to examine the issue with urgency.

Compounding this, trucking companies are advising their customers that they will be increasing their fees, by as much as AUD105/TEU. Increased costs will cover freight companies holding containers at depots and making additional container lifts and transfers, just to clear the empties. Essentially, this is demurrage for containers – but why are the innocent paying the cost?

This is not a short-term problem. The Container Transport Alliance of Australia advised in early September that there was an imbalance of more than 30,000 containers in Sydney, since April. At one level, no one can be blamed for the global asymmetry in trade right now. That is down to the pandemic and the variability of timing and intensity of its impact across global regions. It might be recalled that in March and April, containers both full and empty, were backed up on Chinese wharfs.

That no one may be directly to blame does not mean that the pain should be pushed onto importers and exporters.

As if that was not enough, at least one stevedore at Port Botany appears to be engaged in an industrial dispute that could also be contributing to congestion. We note that news of congestion preceded any public concerns about the industrial action.

Turning to global shipping indices, the long-run chart for the China Containerised Freight Index (CCFI) confirms the expectation of what are proving to be massive spikes in freight costs for major routes. Figure 1 displays the details, which indicate that other than for the local South East Asian route, shipping costs out of Asia are rocketing up. 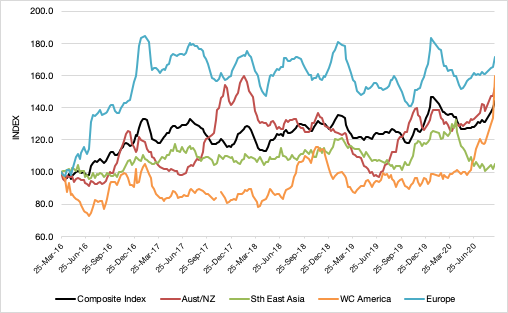 Since the start of 2020, the Composite Index has lifted 5.8%, held back by the 11.8% decline in freight costs into South East Asia. However, the local route – Shanghai to Melbourne is the proxy route for Australia/New Zealand – is up 17.7% over the same period and the West Coast of America is up an enormous 72.3%, at all-time highs.

The Australia and New Zealand route is just 4% from its all-time peak, and the European rate appears headed the same way. There will be some who argue that freight rates are distinct from one region to the next, but the inter-relationship between freight ex-China and freight to and from the rest of the world is obvious enough.

In Figure 2, the recent modest declines in the Baltic Dry Index (BDI) can be observed. The chart now shows the year since the pandemic probably commenced (some time in October 2019) and demonstrates that as ever, bulk shipping pricing has been quite turbulent over the period. Modest decreases in bulk shipping costs are obviously welcome, no matter how short-lived they prove to be.

And while most shipping costs are rising, the International Bunker Industry Association has reported its members expect shipping fuel demand will be between 7% and 17% lower than forecast. Does that imply fuel costs will be coming down and bringing containerised freight costs down with it? We can only hope. 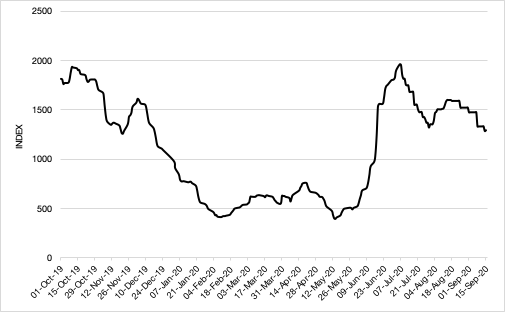 This item was first published in the Pulp & Paper Edge Data and Information Service, in September 2020.