Ovato’s failure was in the numbers

Ovato’s descent into administration is the latest in the long line of print sector failures. The last two years have seen Ovato spiral down to this point, with a succession of closures and restructures heralding this unfortunate situation.

We can all be hopeful Ovato will get its way out of administration and a recapitalisation can be achieved. The print sector and its supply chain need a robust market, where there is more than just one ‘major’. Australia is replete with duopolies: supermarkets, airlines, fibre packaging, paper supply and more are all dominated by concentrated capital interests. More than in any other advanced economy, in fact.

After years of decline and consolidation, the print sector had appeared to settle into its own duopoly, with IVE and Ovato the last pair standing. Yet even the contraction to two – the seeming natural order of the concentrated Australian economy – has been insufficient to sustain both the majors.

It is too easy to ‘blame the business’, and Ovato’s various efforts are testament to the struggle it has been enduring and the attempts it has made to survive. Some were controversial and were certainly frantic. We don’t think the restructure was handled in a manner to inspire confidence and seemed as chaotic as the ultimately disastrous PaperlinX value-shredding in the upstream supply chain.

We can point to two factors that have driven the challenges.

The first is obvious: the decline in demand for print and print related services. The related second factor is the lack of diversification of major printers.

This second factor is critical, in our assessment.

Unlike the duopoly of major merchants (Ball & Doggett and Spicers) whose diversifications have included increased packaging and include the underlying value of holding inventory, Ovato’s diversifications were mostly vertical. That is, their distribution and marketing businesses were earning income from pretty much the same supply chain and in many cases, the same customers as their print business.

There is nothing wrong with that approach of course. However, it is an ‘eggs in one basket’ approach that for persistent success relies on the vertical sector to either be constantly growing or not particularly cyclical.

The unfortunate reality is the print and related services sector is in decline, as is the supply chain associated with it. That is the major issue that is ultimately bringing companies like Ovato down. Declining revenues but increased profits appear to be a feature in Ovato’s case. As we can see below, the price component has been doing what we would expect across the print sector – output prices are higher. 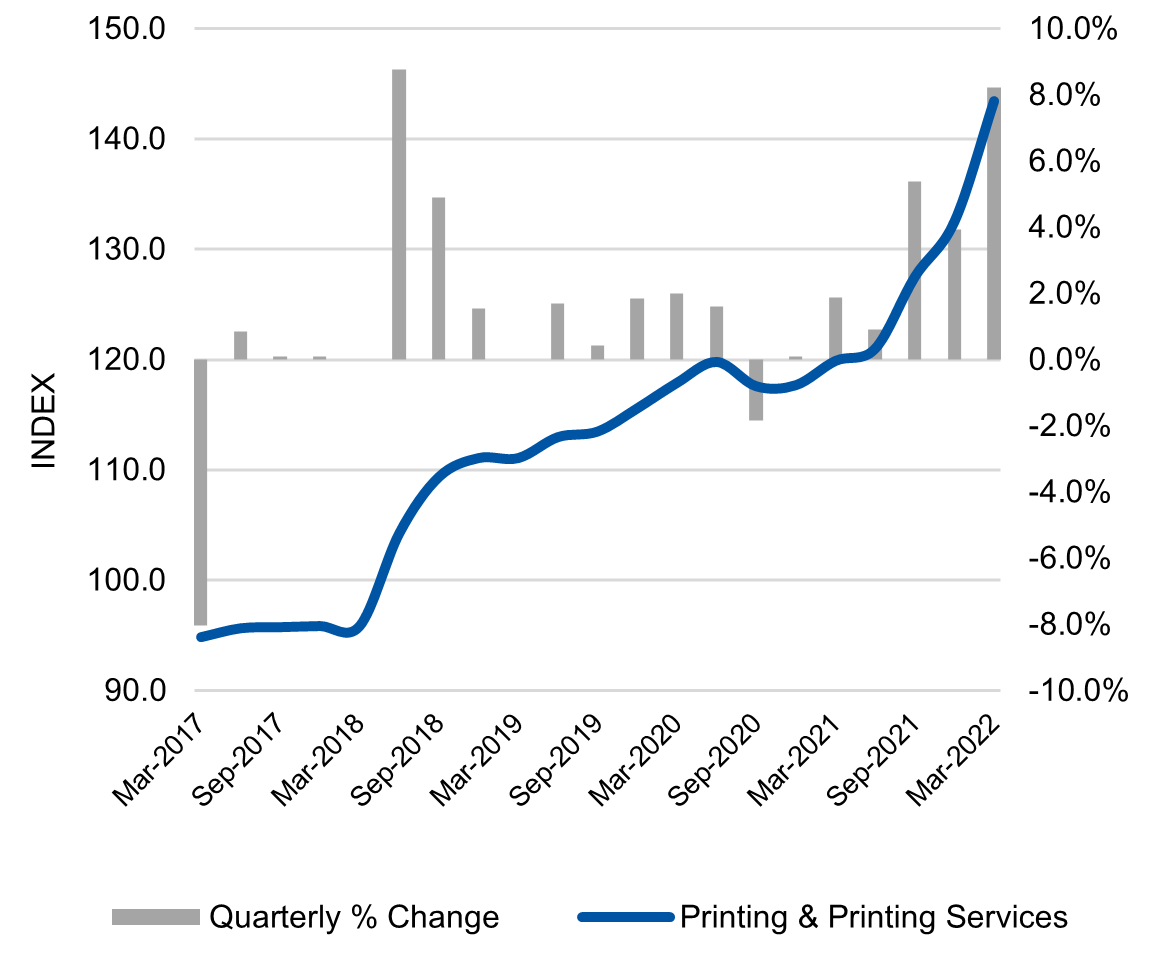 Output prices leaped 8.2% across the sector in the March quarter, compared to the December quarter. That is an enormous rise and fed a 19.6% annual increase in output prices. For all that MQ22 saw sharp increases in the prices the print sector received for its products, the record was actually the June quarter of 2018, after eight quarters of negative or near zero growth.

This recent output price rise has been far more predictable, given the recent increases (3.9% in the December quarter and 5.4% in the September quarter).

This ‘output price’ outlook is supported by the latest Australian Industry Group (AiG) Performance of Manufacturing Index (PMI). That index shows the combined TCF, paper and printing products grouping lifting 19.2 points on a seasonally adjusted basis to 67.2 points. PMIs are diffusion indexes, where performance above 50 indicates expansion and below 50 indicates contraction.

As the AiG reports in the June PMI, the constraints on the printing sector’s further expansion included input prices. In the two charts here, we can see imported paper price indexes prepared by IndustryEdge and published as part of the index series exclusively available to subscribers to Pulp & Paper Edge. 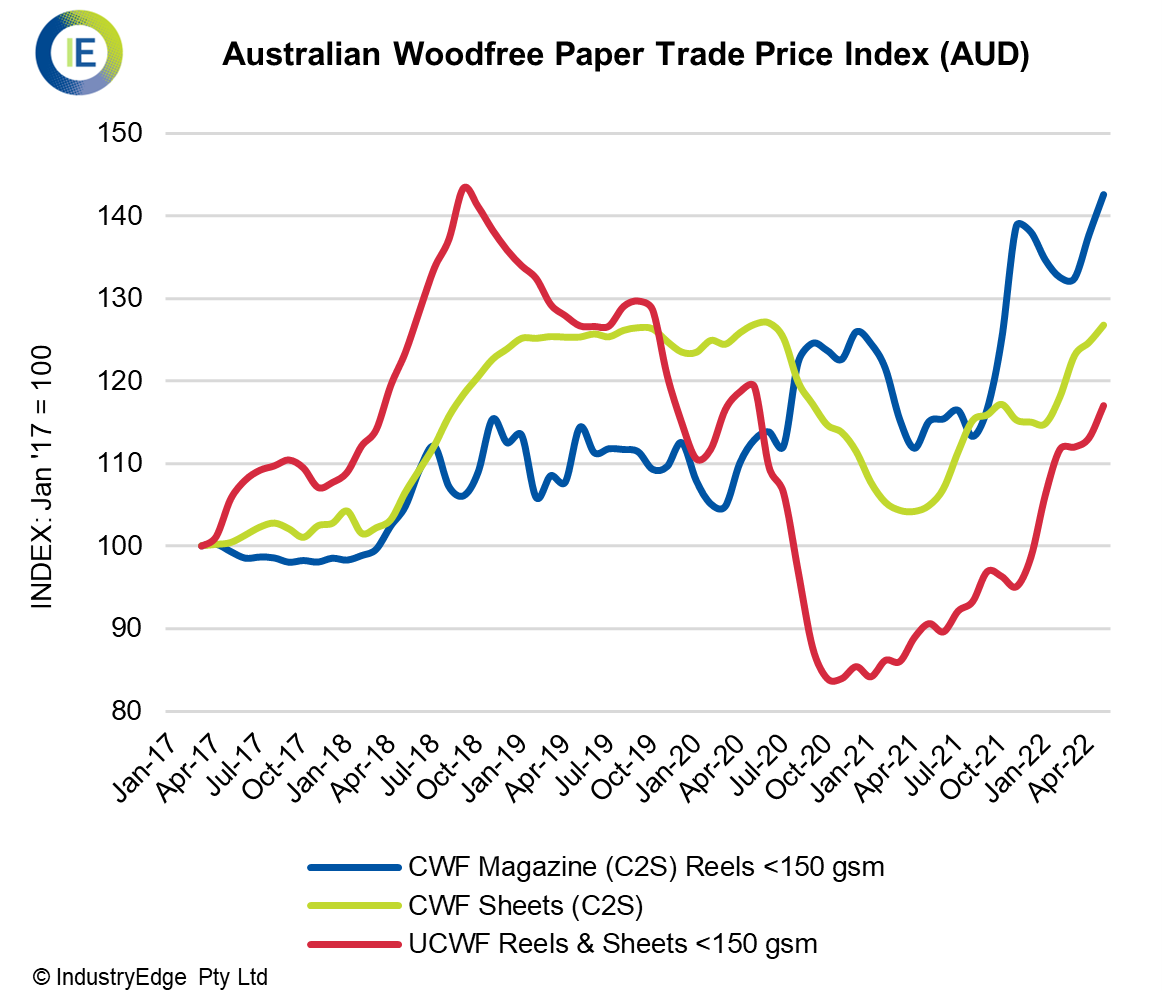 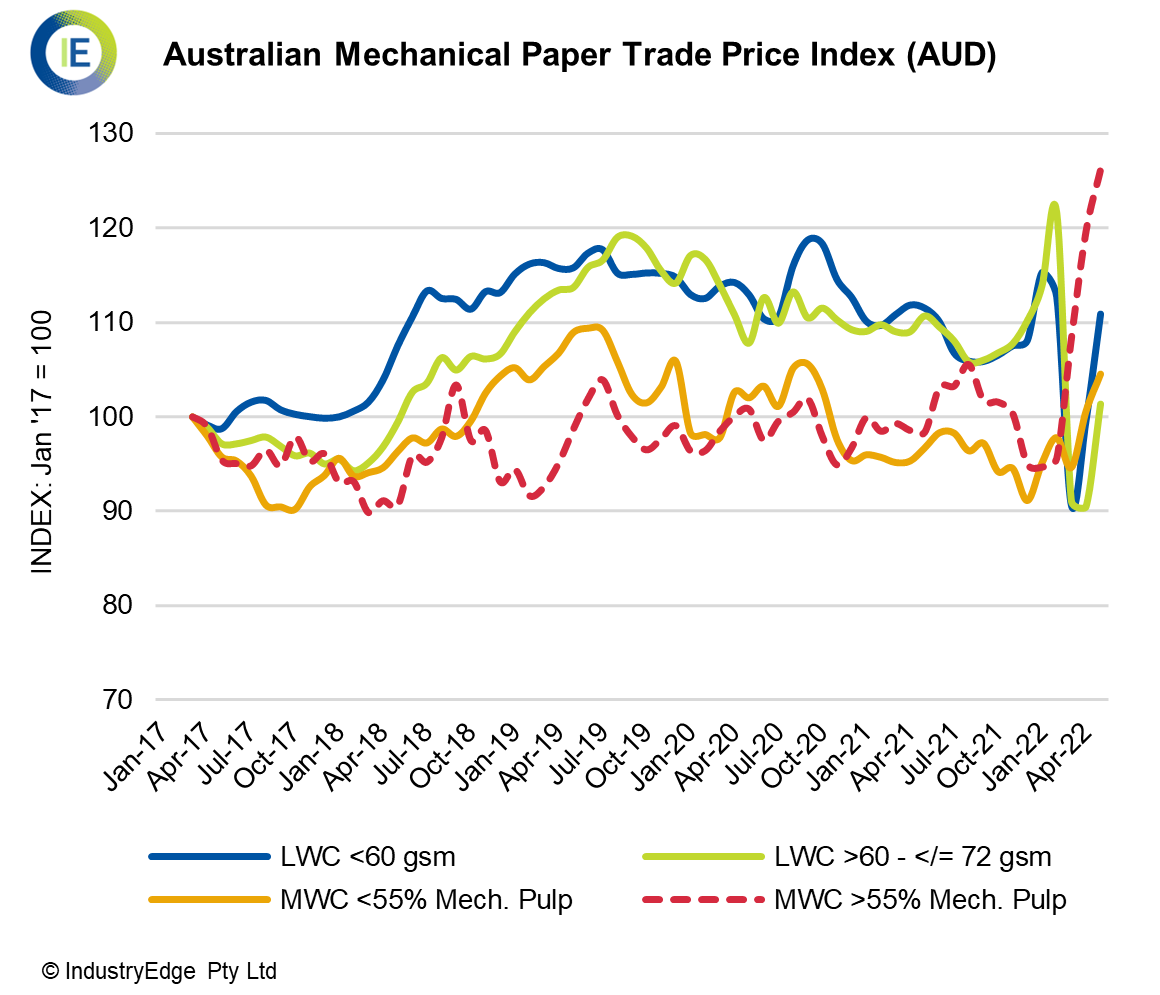 The charts show very large price increases to the end of May 2022. Those input prices show little to no sign of abating in coming months. In May alone, the prices of the grades detailed above increased as much as 12.1% on the prior month and over the three months ended May, as much as 32% for one grade.

We can be hopeful the outcome for Ovato will be some form of restructure and recapitalisation, but we can be certain that will need to include rethinking the business structures, nature of its integrations and how it extracts value.

For the bright light in a dark situation, we can look back to the somewhat analogous situation of PaperlinX. After years of what was an object lesson in undermining business value during the PaperlinX era, strong management leadership and owners with the right capability created the modern Spicers. For the supply chain that has been a stabilising influence.

Ovato could find a future through a similar strategic reconsideration. We certainly hope that eventuates.