Australia’s consumption of sheathing material, especially Oriented Strandboard has grown strongly in recent years, faster in fact than the rate of housing growth would suggest. Source: IndustryEdge for Timberbiz

Over the last year, imports of OSB rose almost 50% and for the year-ended February, topped 50,000 m3 for the first time. 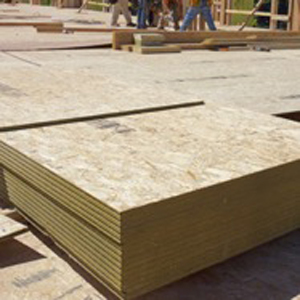 The main grade of OSB saw imports rise more than a quarter to almost 39,000 m3 for the year-ended February 2018, prompting IndustryEdge analysts to state that the result underscores the continuing strength in the Australian housing sector.

“OSB is basically a sheathing material and it is used on new dwellings and renos more than anywhere else.” IndustryEdge’s Tim Woods said. “Growth in OSB use is telling us that the housing market is still strong, but also that other sheathing materials like plywood are being deployed into different applications.”

Mr Woods pointed to the rising average price of OSB imports, which were up 5.2% for the same period, and averaged AUDFob500/m3 for the year, as evidence that OSB is not winning market share based on price. However, he qualified the comments by pointing to the more than tripling of imports of the ‘Other’ grade of OSB imports.

“Having leaped to 11,206 m3 for the last year, the Other grade has clearly won some market share. It is relevant that this material saw its average import price plummet more than 60% over the year to average just AUDFob198.28/m3 for the year.” Mr Woods said.

“It seems this is mainly a different product to what was being imported a year earlier, but it is not immediately clear what grade or end-use that material is being put to.”

IndustryEdge would not estimate the average amount of sheathing being applied to Australian dwellings, but said that exploratory work being undertaken by FWPA may well lead to detailed data on this in the future. Woods did say that given the well understood role of OSB in house sheathing, the new area of interest would be in the uses and application of OSB in townhouses, particularly as they are a growing housing format in what is a gradually declining domestic housing market.

This data is analysed in IndustryEdge’s monthly publication, Wood Market Edge, which is available for subscription, and is also provided on a complimentary basis to subscribers to the monthly wood products trade data series, which includes Woodchip Export, Log Export and Sawnwood Import and Export data.