Orora has announced the sale of its Australasian fibre business to Nippon Paper Industries (NPI) for AUD1,720 million. In all, the transaction includes 25 manufacturing plants, 27 depots and involves more than 3,300 employees. The key to the transaction is Orora’s corrugated box business, including the Botany mill.

The transaction is expected to complete in the first quarter of 2020.

NPI is already the owner of Australian Paper, the supplier of Orora’s virgin Kraftliner for the manufacture of corrugated boxes, and also supplies Orora with other packaging materials. Australian Paper and Orora’s Australasian fibre packaging business were previously integrated.

IndustryEdge’s headline view is that this transaction is overdue from a rational stand-point. The re-integration of the supplies of containerboard materials must be expected to deliver synergies and unlock value.  The re-integration comes about as Australia is in the midst of a deep and increasingly distressing drought appears to be coincidental.

Returning to the fold… ing box

The sale of Orora’s Australasian fibre business means that after almost twenty years of separation, Australia will once again have two fully integrated fibre packaging suppliers. The other is the privately-owned Visy, which is the clear market leader in the corrugated box market in Australia.

NPI’s two businesses in Australia (Australian Paper and the new Australasian fibre business) were once largely integrated, inside Amcor.

In 2000, Amcor de-merged its main papermaking assets into a company called PaperlinX. That included the Maryvale Mill (Latrobe Valley, Victoria) and its PM4, on which virgin Kraftliner was manufactured, and PM1, on which Sack Kraft is manufactured.

Amcor retained ownership of the ‘recovered fibre’ mills, including the Botany Mill (Sydney, NSW) and all of the corrugating and box converting facilities, along with other fibre packaging assets.

That separation saw the Maryvale mill selling most of its Kraftliner production to Amcor (now Orora), as well as exporting significant volumes. The Maryvale mill also supplied Sack Kraft to Amcor to manufacture bags and sacks. The separation of the fibre packaging assets created challenges for those on both sides of the transactions that are, on face, removed by this return to the fold.

At least initially, IndustryEdge considers it unlikely that there will be significant operational impacts. Certainly, that is the case when it comes to the supply of materials for the manufacture of corrugated boxes.

There is currently a notable lack of competition between the Maryvale (virgin grades) and Botany (recycled grades) facilities.

Whether in Australasia, Asia or globally, the strongest expansion opportunities for the paper and paperboard sector lie in packaging and industrial paper markets. Operating a single but very modern, well equipped and capable paper machine at the Botany mill, Orora was constrained primarily by capacity in its further development, in a way that its main competitor, Visy, was not.

With five machines at the Maryvale Mill, two of them already supplying Orora substantially, the combined competitive capabilities of NPI in Australasia are significantly improved.

IndustryEdge’s analysis demonstrates that around half of Australian Paper’s Kraftliner (manufactured from primarily virgin fibre for the outer liners of corrugated boxes) is currently supplied to Orora. Australian Paper manufactures Kraftliner on PM4 at its Maryvale Mill in the Latrobe Valley (Victoria).

In a corrugated box market in which the fully integrated Visy dominates and Orora is a solid second, there is a logic and commercial rationale to reintegrating the corrugated box offering of Orora, with the supplier of its high-performance liners.

The chart below shows Australia’s consumption of containerboard over the last decade. The impact of the drought can be seen in the modest decline in 2018-19, but more importantly, the residual strength of the market is obvious. 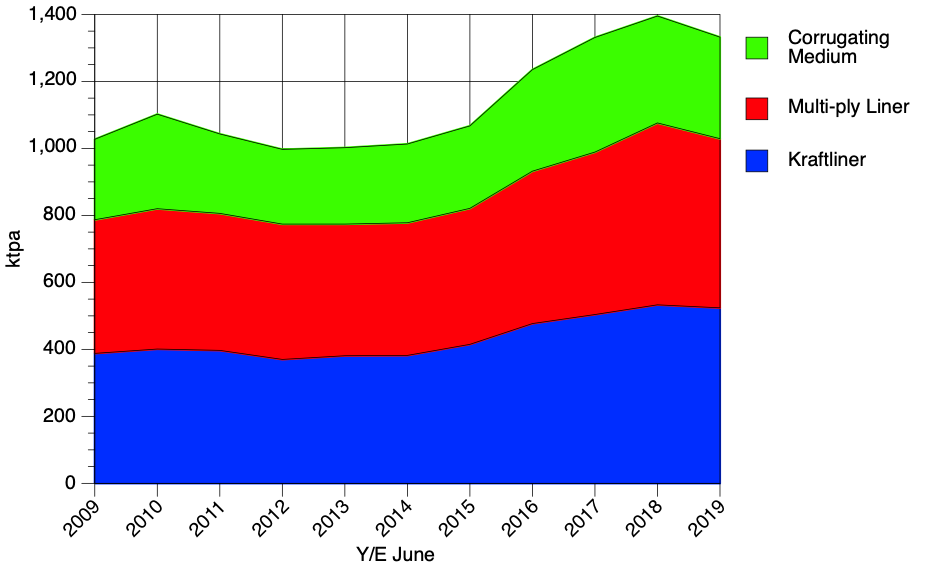 The total New Zealand market was 0.394 million tonnes in 2018-19, with most imports supplied from Australia.

Future management integration the tip of the iceberg

Although the details are not yet known, all indications are that the Australasian fibre business will be structured with the existing Australian Paper business.

It makes sense to integrate the corporate and back-office functions of the two units. However, there are greater opportunities.

The Australasian corrugated box market has only three significant participants: Visy, Orora (in conjunction with Australian Paper) and the New Zealand based Oji Fibre Solutions (OFS). Visy and OFS are integrated businesses, able to leverage fibre, operational and market opportunities across and throughout a single business.

That opportunity will shortly also belong to NPI. In the corrugated box market, that could prove to be significant, as could the combined international capabilities of the two businesses.

Pivot to packaging… and to recycled grades

NPI is strategically focussed on packaging markets into the future. The acquisition of Orora’s Australian fibre business is another step on that journey. That it is extending its footprint beyond Kraftliner and following a fully-integrated path in Australasia that has already been trodden by Japanese counter-part Oji is notable.

That this announcement comes less than a week after the announcement of Visy’s acquisition of Norske Skog’s Albury newsprint mill, and its apparent interest in it as a packaging paper facility cannot be ignored.

The pivot to packaging is well underway.

What may seem less obvious is the increasing nod to recycled grades and to paper recovery. Australian Paper already uses some recovered fibre in some grades of its Kraftliner made at Maryvale and operates a deinking plant for recycled office paper production. The addition of the ‘recycled only’ Botany mill adds to the renewed emphasis and comes at a time when recovered fibre has rarely been more valuable, nor more challenging for Australia and many other countries.

IndustryEdge will address this development in greater detail, in the October 2019 edition of Pulp & Paper Edge.

Further details on Australian and New Zealand paper and paperboard markets is available in the 2019 edition of the Pulp & Paper Strategic Review.

[1] IndustryEdge notes that its data is more up to date than that referred to in some of the announcements, but confirms the general trends in those announcements are consistent with the current data