Nation of readers! Books live on as directories, guides and fashion publications collapse

Australians remain voracious readers. Latest data showing Australia’s imports of printed material that the national love affair with the printed word continues – so long as it is in book form.

Total imports of printed books declined 1.7% in 2018, falling to an annual value of AUD470.1 million (books only). That relatively modest decline was book-ended by steep falls in the value of imports for Dictionaries and timetables (-35.6%) and Fashion books (-25.7%) on the one side and by softer declines for Paperbacks (-2.1%) and Hardbacks (-0.1%), on the other side.

The table below shows the last two year’s import data and the year-on-year percentage changes. The table emphasises the resilience of book imports (both hardback and paperback), over the other forms of book imports.

As the pie chart below shows, the combined contribution of Paperback and Hardback books was 77% of total import value in 2018, amounting to AUD363.4 million, measured on a free-on-board basis. 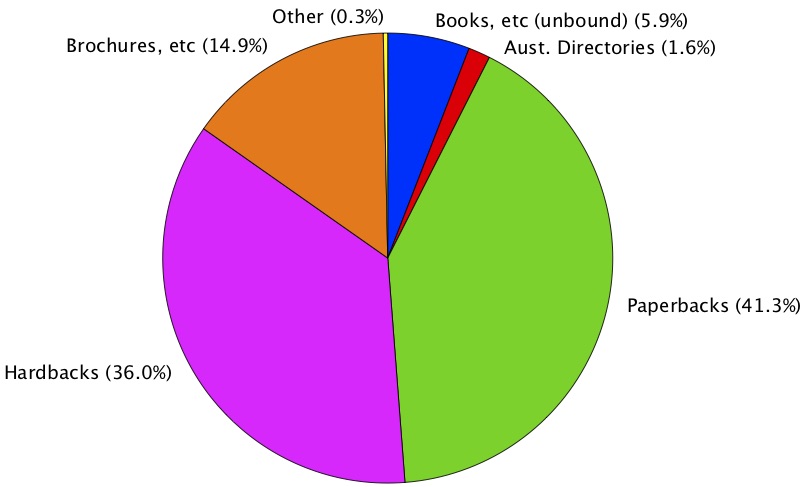 Over the last decade, imports of paperback books have seen the influence of the United Kingdom wane under the combined pressure of Hong Kong and China, with the latter growing its share until 2018. Cost pressures associated with the more pulpable forms of fiction are well understood.

It is a different case with Hardback books, where a small number of countries, led by the USA, dominate. Since 2009, the value of shipments from the USA has risen 15.2%. By 2018, its supplies accounted for almost 36% of the total value of imports, up from 32% in 2009. The United Kingdom has a continuing presence in Hardbacks, the same as for Paperbacks. This colonial overhang is unsurprising, but it is important to note that like books from the USA, those from the UK are almost invariably in English. Multi-cultural and multi-lingual Australia may be becoming, but it is unsurprising that the significant majority of book imports are in English.

What may be more surprising is that in 2009, almost 35% of the value of imported Hardbacks came from China and Hong Kong. By 2018, that had fallen back to 28%. In some things at least, the ties of the past remain.

This is an edited extract of an item first published in the April 2019 edition of Pulp & Paper Edge (Edition 163).