Australia’s long lost Coated Cartonboard imports have been ‘found’ and may soon make their way back home.

In late 2013, when Amcor closed its Petrie Cartonboard Mill in Queensland, Australia’s entire supply of cartonboard was imported. Inevitably, imports rose throughout 2014, as inventories were used and the new operating state was adopted.

But the known production of the Petrie Mill was closer to 130,000 tonnes per annum. The question in the sector’s mind was where had as much as 80,000 tonnes per year of cartonboard gone?

The chart below appears to provide some clues. It shows monthly imports of Coated Cartonboard and Medium-Weight Coated Mechanical Paper Reels manufactured from more than 55% Mechanical Pulp (MWC Reels >55% MP), and it also shows the annualized totals of the same. 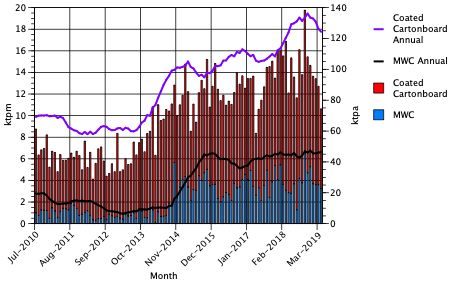 It is important here, and possibly vital, to know that these products are similar in two respects.

Both are coated and both are made from a greater proportion of mechanical pulp than chemical pulp (although there are of course significant recycled content grades of cartonboard).

In addition, they are recognised as being similar in the trade classifications. Both fall within the 4810 grouping which relates to ‘Paper and paperboard, coated on one or both sides with kaolin (china clay) or other inorganic substances…’.

What distinguishes these grades of paper on the one hand (the MWC Reels >55% MP) and paperboard on the other (the Coated Cartonboard) is not really their material consistency or the fact they are coated. They are distinguished based on what they are reportedly being used for.

It might be said that one importer’s Coated Cartonboard is literally another importer’s Medium Weight Coated.

For the year-ended July 2014, six months after the Petrie Mill closed and its inventories had washed through the market, imports of MWC Reels >55% MP totalled a relatively humble 10,327 tonnes. The major suppliers were the USA and Korea, with China the third largest contributor.

One year later, for the year-ended June 2015, imports lifted 250% to 35,962 tonnes (they were still on the rise), and China had grown to be the largest supplier, followed by Korea, with the shipments from the US hardly altered at all.

The chart and table below show this phenomenal annual change, and the country contributions. 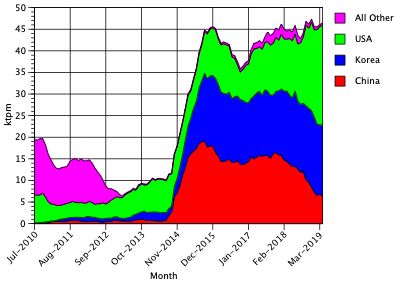 The table below addresses MWC Reels >55% MP imports for the year the Petrie Mill closed and the subsequent year.

It seems obvious, on this examination, that the majority of paper imported as Medium Weight Coated Reels >55% Mechanical Pulp has probably been Coated Cartonboard since the middle of 2015.

If that is so, then perhaps as much as 40,000 tonnes of the 46,423 tonnes of MWC Reels >55% MP imported to Australia over the year-ended April 2019 is actually Coated Cartonboard. If that is so, it alters some consumption balances and market shares very significantly. The chart above demonstrates it, but the table shows that over the last year, imports form the USA returned to prominence at the expense of China.

The renewed US presence could be related to the trade war, but for our part, we think it is more likely linked to the significant US ownership (Graphic Packaging International and West Rock) of two of Australia’s major cartonboard converters and folding box businesses.

IndustryEdge hastens to make the point that if closer examination confirms this to be the case, some adjustments may be possible to consumption volumes. However, there are no import duty implications, or other compliance issues, of which we are aware.

The July edition of Pulp & Paper Edge will explore this issue in greater depth and analyse the Coated Cartonboard market in Australia, taking into account these additional volumes.

This item was first published in the June 2019 edition (Edition 165) of Pulp & Paper Edge.