Total consumption of labels and label paper has grown an average 3.1% per annum since 2009-10 in Australia. Total consumption was 43.7 kt in 2018-19 (down 6.8% on the prior year), made up of imports of fully converted Paper Labels and reels and sheets of Label Paper.

Over the course of almost a decade, the key feature of the market is however not its growth, but rather, the growth of imports of pre-converted Paper Labels on the one hand and the decline of imports of Label Paper for local conversion, on the other hand.

The simple chart below sets out the distinction between the two import formats since 2009-10. 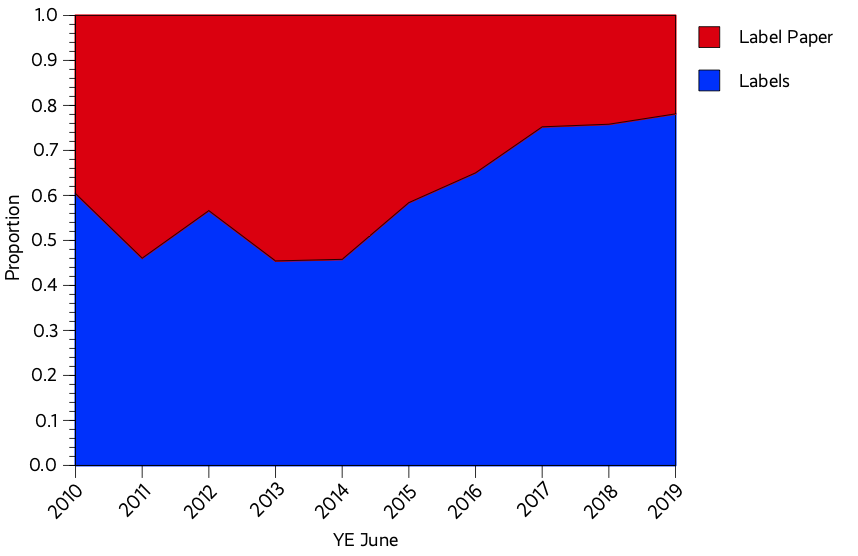 Pre-converted labels have grown their share of the total market from 60.4% in 2009-10 to 78.1% in 2018-19. As the table shows, Converted Paper Label imports lifted an average 6.1% per annum over the decade while Label Paper imports – all of which are Coated Woodfree grades – declined an average 3.5% per annum. In the overall scheme of domestic manufacturing, it may not be much, but something close to 3.5 kt per annum of converting work is no longer performed in Australia.

Looking into the data in detail, the second chart shows just how strong the Converted Label growth has been. More importantly, it shows that all of the growth has been in Poly coated Paper Labels. 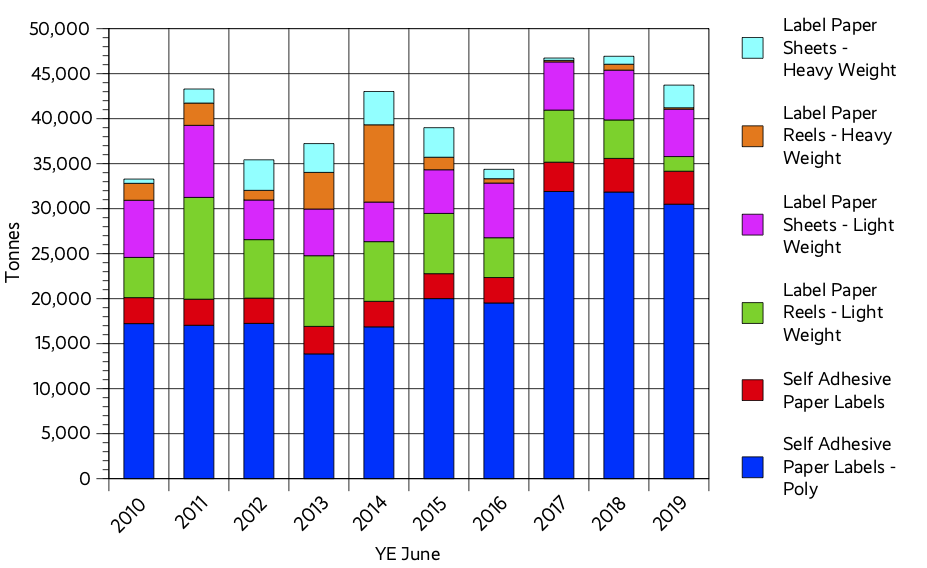 There are several features of note in this market. The average 6.6% per annum rise in consumption of poly coated labels has implications for paper and board recovery and recycling. Unless the poly breaks down, it has to be removed from the packaging to which it is generally applied. In the era of <0.5% contamination and proposed recovered paper bans, this is a serious issue in its own right.

For the local converting market, 2018-19 was a year of change. The reel grades were monstered in the market declining by 62% (the lighter-weights ~ <150 gsm) and 77% (the heavier-weights ~ >150 gsm) respectively. The market for local conversion is decidedly sheet-fed and increasingly digital. The items on digital printing equipment imports in this edition of Pulp & Paper Edge make that plain enough.

Just as the printer market is shifting to the digital, so too is the label printing market. The big issue however, is that local conversion market is an ever-declining proportion of a market that is now held primarily by imports of pre-converted labels.