Australia’s average hardwood chip export price to China hit an all-time peak of AUDFob230.64 per bone dried metric tonne (bdmt) in January 2019. That price is a substantial 24.8% higher than in January 2018, underscoring the additional value being placed on fibre of all types across the globe.*

While exchange rates have much to do with the price in Australian dollars, we need look no further than the new record average of USDFob167.63/bdmt for January, to compare the global position. A year earlier the USD price was 12.4% lower.

Hardwood chips are used primarily in the manufacture of tissue and printing and communication papers, but also have application in dissolving pulp used to make synthetic cloth.

Early 2019 has seen demand for paper soften markedly, but as this month’s Pulp Market Briefing identifies, there is a battle underway between Chinese pulp producers and their customers and South American market pulp producers. Australian hardwood chip supplies will remain at higher prices while ever the Chinese producers seek to assert their independence from imported pulp. 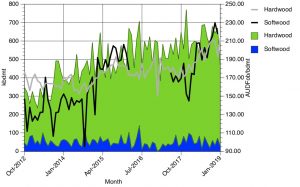 It is useful to examine export prices over time, which are displayed, in US dollars, in Figure 2. January 2019’s record USDFob167.63/bdmt into China has been a developing trend for hardwood chips. We note that this includes a mix of products with different fibre yields and pulp properties. Industry intelligence is that the current price for the main eucalypt species is between USDFob170-175/bdmt. We may yet see hardwood chip prices climb a little further over the first half of 2019. 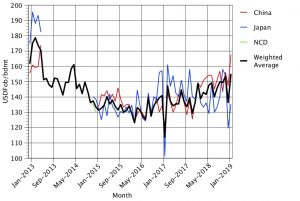 Whether they advance further remains to be seen, with negotiations for the second half of 2019 expected.

We note Softwood chip exports have again been placed under confidentiality restrictions, with application from 1st January 2019. However, as the data shows, IndustryEdge’sdetailed monthly analysis allows for close estimation of softwood chip exports.

First published in the monthly Pulp & Paper Edge in March 2019