While the average price is the average price, there is more to this market situation than meets the eye. In December 2019, the highest price recorded for Australian OCC exports was AUDFob435/t on a small volume shipped to Chennai in India. That is not an uncommon occurrence, and in a month when exports totalled 45,103 tonnes, has a very small impact on the above price. There are always a few tonnes shipped at high prices.

But what is entirely unheard of, is that in November and December, huge quantities of OCC (almost 42% or 18,800 tonnes in December alone) was exported for just AUD11/t.

There have never been tonnes shipped at such low prices.

The impact of this apparently massive reduction in export prices can be seen in the chart below. 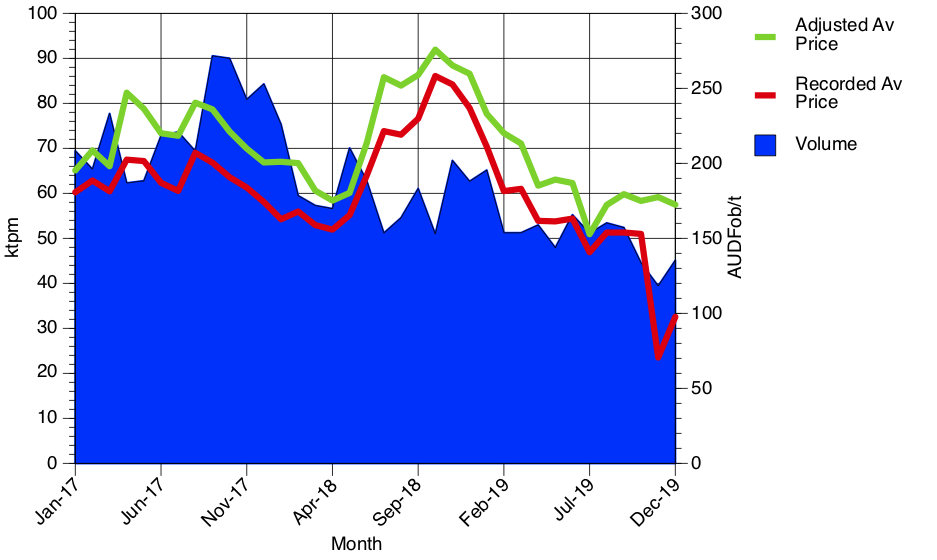 Getting down to the details

For a number of years, IndustryEdge has been tracking the prices of Unbleached Kraft/OCC exports and undertaking forensic examinations of the export volumes. It has long been clear that some exports have been recorded with estimations of total volumes and values (they are always rounded to 100 tonne or $100 increments).

For our consulting assignments and to assist clients trading in open markets that have become very challenging in recent years, we have maintained a data series that removes the impact of what we have come to know as ‘curated’ exports.

In November and December, these volumes appear to have ‘lost their zero’ and have been recorded at just AUDFob11/t. It is important to be clear that this is extensive. In both months, these curated exports went from Brisbane, Sydney, Melbourne, Port Adelaide and Fremantle ports. They were delivered to China, France, India Korea, Malaysia, Myanmar, Nigeria, Taiwan, Thailand and Vietnam.

We did not report on this in November, waiting to see what happened. But the continuation of this trend, and its extent and impact make it important market information.

Why does this matter

It is evident that exporting recovered paper for AUD11/t is unsustainable and below the cost of production and supply. The reason IndustryEdge has been removing all transactions where the price is below AUDFob110/t is because with industry assistance, we assessed that as being the minimum at which an export could occur consistently on a $0 margin.

At AUD11/t, in some cases, the cost of freight to the export port is not covered, let alone, the costs of collection, unloading, sorting, baling, re-loading and delivery to port.

It is possible that old stock is being liquidated, but the prices are so low, they beggar even that possibility, and how long can that go on for?

This data, if left uncorrected, creates an impression that prices for the main grade of recovered paper have completely tanked. They have not.

Absurdly low prices imply Australia is shipping rubbish rather than OCC. It is not. And rubbish would probably be more valuable than AUD11/t in any event.

The problem for the entire supply-chain is that recorded prices at these levels play into the hands of those who argue Australia’s recovered resource export trade (important for Australia and for our trading partners) is worthless and should cease. It is not and should not.

IndustryEdge looks forward to subscribers and clients resolving this issue, so that an important market can be accurately represented at a critical time in its history.

This item first appeared in the February 2020 edition of Pulp & Paper Edge (Edition 173).