End of cartonboard from New Zealand?

The Whakatane Board Mill – owned by SIG Combibloc – will close around the end of June 2020. Approximately 210 people will lose their jobs, after a short search reportedly failed to yield a buyer.

Once a cartonboard facility that stood alongside the Petrie Mill in Queensland, the Whakatane Board Mill is the region’s sole remaining manufacturer of coated cartonboard. The mill’s wide range of options, from general folding boxboard to liquid packaging board substrates made it both versatile and vulnerable.

On the one hand, the mill was able to supply a wide range of products to what are small markets. On the other hand, it appears to have struggled in recent years to make enough from its activities to sustain itself against very strong global competition.

The introduction to the Australian market of the North American giants, Graphic Packaging International (GPI) and West Rock, made competition more fierce locally, even after the Petrie mill closed in 2013.

In recent years, the mill has been focussed on supplying liquid packaging board (LPB) grades to its parent company, which now plans to source its LPB from other suppliers.

With a capacity in the vicinity of 140,000 tonnes per annum, the Whakatane Board Mill is less than half the average size of new cartonboard manufacturing facilities installed around the world in the last decade. Equally significant is that for many years, the mill’s output has been largely directed toward exports.

We can see in the decadal chart below, from IndustryEdge’s 2020 Pulp & Paper Strategic Review that the export profile has changed over the last decade, with Australia once the recipient of most of the production. However, since the conversion of the mill to the production of primarily liquid packaging board, Thailand became the most significant recipient. 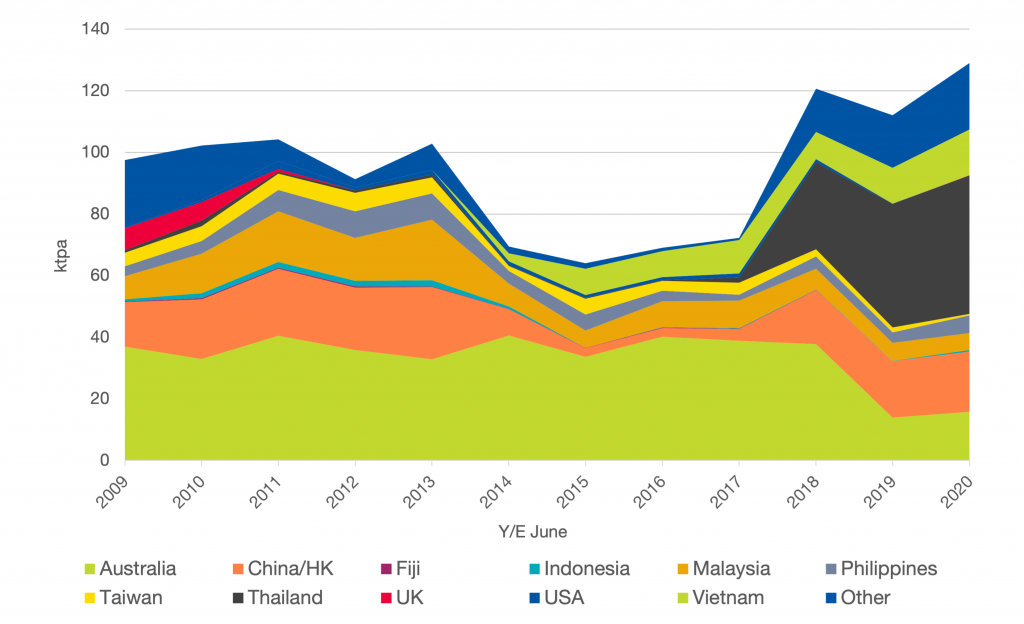 As the more detailed and recent chart and table below demonstrate, exports of cartonboard grades from New Zealand have been broadly consistent over the last four years. It should be noted that not all of the exports reported here were produced at Whakatane, some are laminated and coated products exported after conversion in New Zealand.

The increase in exports over the last year is notable, with an increase of 16.4% to 136.9 kt over the year-ended January 2021 suggesting that exports are not only at the top of their long-term range, but have grown at the expense of local sales in New Zealand.

In that context, it is notable that in January 2021, the average export price of NZDFob1,220/t was 9.2% lower than a year earlier, but just 1.1% lower in US dollar terms. No real evidence is needed, but the chart clearly demonstrates that for the most part, contracts are struck in US dollars. Benchmarked with international prices, the appreciation of the NZ dollar against the US dollar has reduced the income (in NZ dollars) received by the Whakatane Board Mill.

Has that made a difference to the thinking about the future of the mill? We think it must have done so, underscoring the challenges of manufacturing in small and open economies.

As the closure of the Whakatane Board Mill was announced, there was interest in what opportunities the closure presented for the region.

At the simplest level, there is around 20,000 tonnes of supply to Australia that will be of interest, and perhaps as much for New Zealand. However, as would be expected, the churn in the supplying country does not mean the corporate supply arrangements are disrupted. On balance, we would expect only limited changes to supply arrangements, in the near term.

This is an edited extract from the March 2021 edition of IndustryEdge’s Pulp & Paper Edge (Edition 189).