Economics: Manufacturing picked up in June, but it’s all about food right now

At a headline level, news of the expansion of the Australian manufacturing sector will always be well received. It is good news, but it is also patchy news, because as we well know, not all sectors are faring as well as others.

The Australian Performance of Manufacturing Index (Australia PMI®) lifted 9.9 points in May, to reach 51.5 points, meaning the sector recovered somewhat from the disastrous performance in April. The PMI is a diffusion index, with any result above 50.0 meaning a sector expanded and any result below it, meaning it contracted. The further away from 50.0, the bigger the expansion or contraction.

Notably, the Australian PMI® has not to date suffered declines of the magnitude experienced in the Global Financial Crisis. It is not immediately clear why that would be the case, but one possible reason is that much of Australian manufacturing is centred around food production that is likely to be more resilient in an economic downturn than other sectors.

Certainly, the Australian Industry Group (AiGroup), the owner of the Australian PMI® reported that “…almost all of the improvement in June was concentrated in the large food and beverages sector.”

Although the New Zealand PMI did better than its April performance in May, at 39.7 points, NZ manufacturing remains in contraction. As Figure 1 shows, New Zealand’s manufacturing sector had been trending down for some time, but had begun to show some signs of improvement in early 2020. We addressed the New Zealand situation, in some detail, in the June 2020 edition of Pulp & Paper Edge. Those thoughts can now be set aside, for the time being, at least. 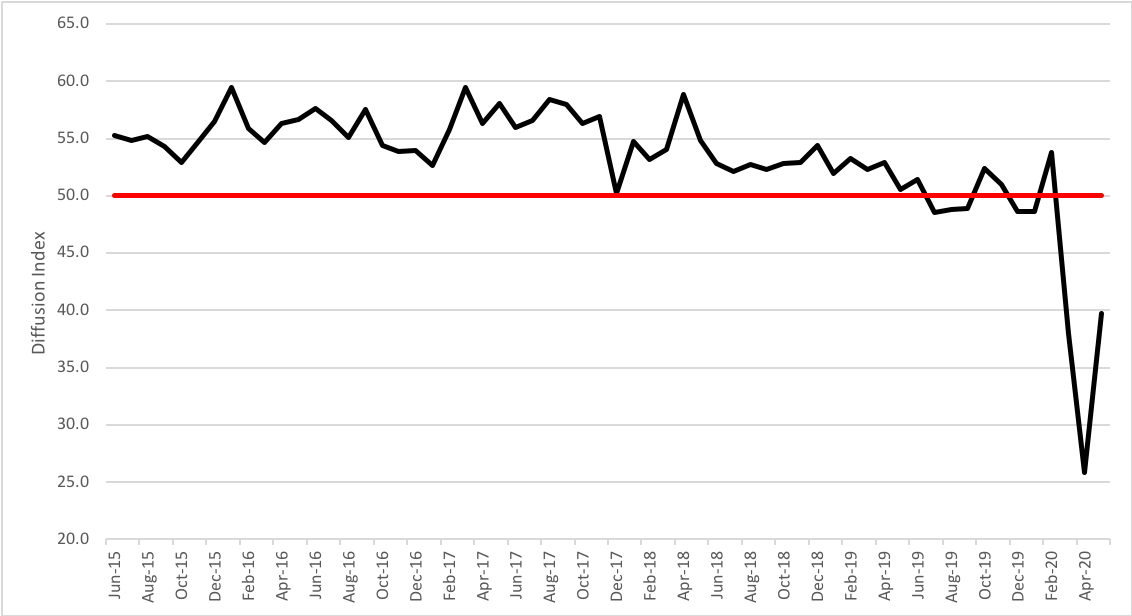 Casting a pretty gloomy note for the NZ manufacturing sector, the Senior Economist at the Bank of New Zealand reminded everyone that the ‘recovery’ in May only got NZ back to “…the sort of levels it sank to during the 2008/09 recession.”

At a sectoral level, some paper and paperboard producers in Australia are reporting their manufacturing was strong in June. This included packaging producers, and the major tissue product manufacturers. However, the latter reported that excess demand was stripping away after the panic buying of March and April and one advised they expected ‘household inventories’ would result in a further slowing of tissue product (mainly toilet paper) production.

Wood products suppliers are also having a patchy time, including in the domestic market. Major sawmillers and panel producers have slowed their production markedly: some by as much as half. That is mainly due to some softness in the housing sector, but that is, as we report in Wood Market Edge online, a patchy and inconclusive market right now.

How can we read the current state of local manufacturing in the region right now? Any recovery is tentative at best, with more pain likely for some sectors in the second half of 2020. Those providing consumer necessities will always be better off than those who produce more discretionary items, but even they may not be immune.

Other items in Edition 181 of Pulp & Paper Edge