China to the rescue! Has real growth returned? ~ Economics Briefing

Always a little suspect, China’s economic growth was reported at 6.4%, year-on-year in the March quarter of 2019. Growth was above expectations and was driven by a solid increase in industrial output, as well as domestic consumption, feeding into renewed hope that the driver of global economic growth has turned the corner.

If it was anywhere but China, growth at this level would be met with shock. For China however, the growth rate remains the lowest since the GFC, with ongoing concerns about both public sector borrowing and access to capital for the private sector pulling China in different directions.

The chart shows China’s economic growth on both a quarterly and annual basis. 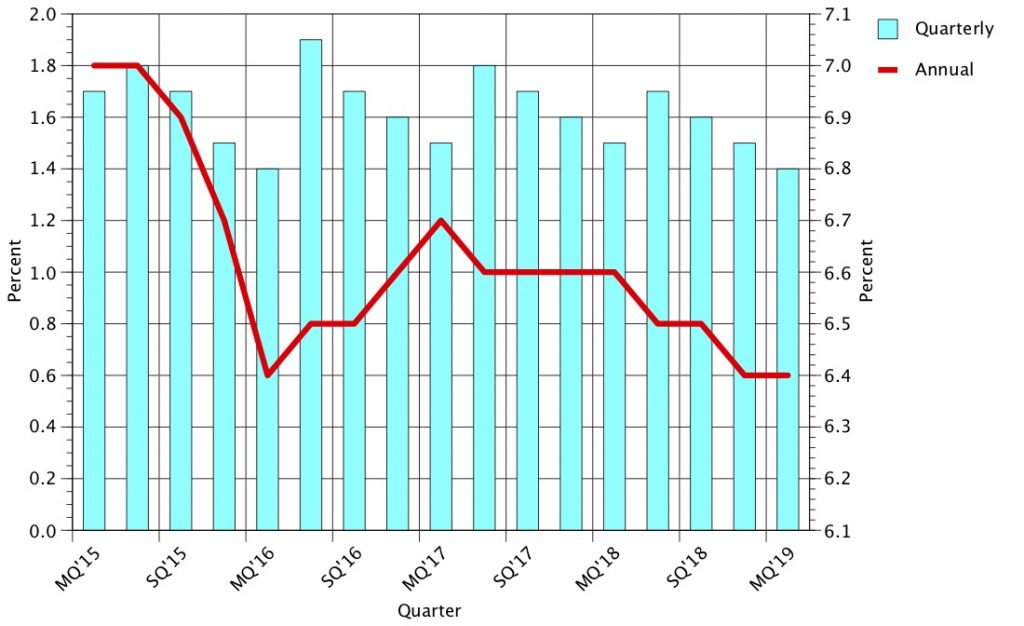 Activity in the manufacturing sector lifted a very strong 9.0% in March, well ahead of the 5.6% recorded earlier in the year. In aggregate, industrial production was 6.5% higher in the March quarter than for MQ’18.

There are several reasons this is important.

Second, if the Chinese data is as robust as reported, then it appears that the world’s leading manufacturing economy is finding its way around the constraints of the nation’s trade war with the US. That would be very good news for the global economy, because typically, unedifying trade disputes result in sustained periods of lower economic growth.

Third, Chinese retail sales lifted 8.7% year-ended March. The Chinese consumption economy is ticking along, with significant growth recorded for consumer durables like furniture, appliances and telecommunications equipment. Importantly for future growth, expenditure on building materials was up a particularly strong 10.8%).

Like most things economic, the headline data has to be tempered with the background news. A starting point for that is the means by which the Chinese economy appears to have grown.

Unsurprisingly, the national government primed the pump in the March quarter, delivering massive stimulus that contributed to economic growth. This came from huge tax cuts and massive infrastructure developments, equivalent to a total of around AUD835 billion (USD596 billion).

National government economic stimulus activity may be masking worrying levels of corporate and local government debt. Rumours of increased ‘shadow banking’ activity in the corporate sector continues to be of concern in China, but so too is out of control local government expenditure that S&P Global reported amounts to a mind-boggling USD6 trillion.

Good news the sunshine of Chinese economic growth may be, but its sustainability is a serious storm-cloud on the global economy’s horizon.

This item was first published in the April 2019 edition of Pulp & Paper Edge (Edition 163).