Australia’s woodchip exports totalled 287,066 bdmt in August (bone dried metric tonnes), up 24.2% compared with the prior month. However, exports remain at rock-bottom levels (August was the third lowest month in more than a decade) as a combination of soft demand and a reluctance to supply at discounted prices bites deep into hardwood chip exports, especially the premium Eucalyptus Globulus, the predominant mainland plantation hardwood species.

On a year-on-year basis, total exports were 34% lower than a year ago, at 4.695 million bdmt. Hardwood chip exports declined 36% to 4.207 million bdmt, while the smaller volumes of softwood chips fell 6.1% year-ended August to 0.488 million bdmt.

In previous downturns, the entire hardwood chip sector would typically react by providing price discounts to buyers that would subsequently prove very difficult to recover. While there is some evidence of discounting for volume in Australia’s current hardwood chip exports, that seems to consist of a comparatively small outbreak from what is otherwise an apparent determination among the main sellers to maintain prices.

IndustryEdge understands that the major Eucalyptus Globulus growers continue to be largely out of the market, growing their fibre on until market conditions improve. That has occurred before, but never to this extent.

In that context it is notable that the Australian average export price to China in August 2020 was USDFob170/bdmt, while the average for all hardwood exports was USDFob146/bdmt. We note that some exporters have been granted confidentiality restrictions over all hardwood chip exports to Japan and Taiwan and that is clearly impacting the average price in quite a dramatic way.

The tools on Wood Market Edge online allow subscribers to understand the port-to-port volumes of hardwood chip deliveries, allowing them to rebuild the data some exporters have removed from scrutiny. They can also download and interrogate the delivery data for Japan, China and Taiwan.

Figure 1 displays Australia’s hardwood chip exports on a monthly basis. Leaving aside the obvious decline in total exports, IndustryEdge’s view is that the most striking feature is the price stability described above. 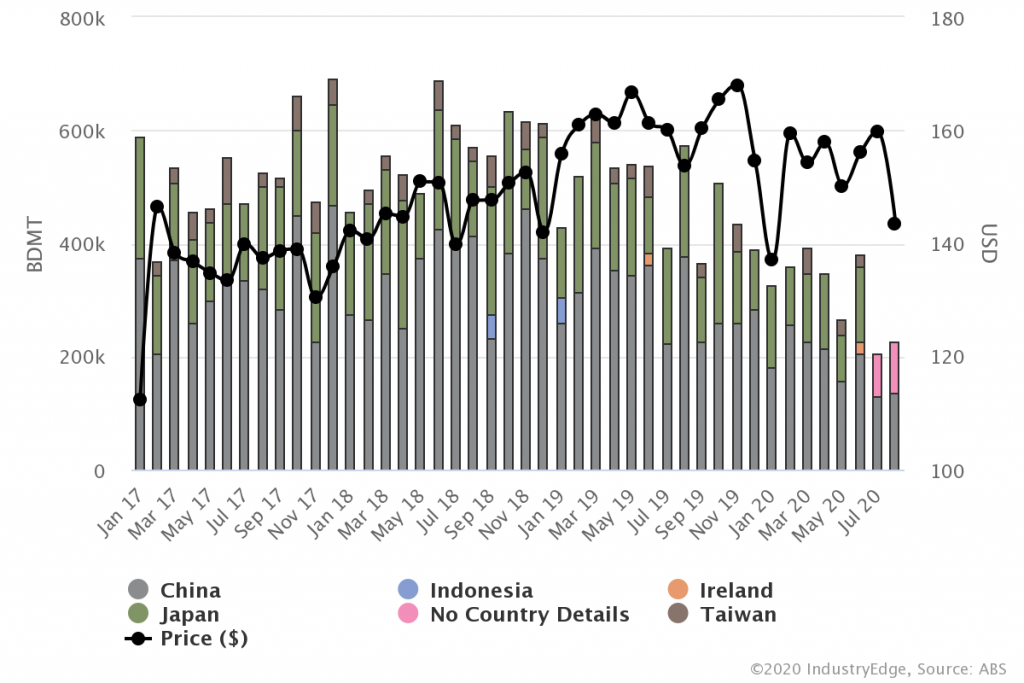 Using data on our Wood Market Edge online platform, we can see in Figure 2 the most-stark contrast for exports of hardwood chips from Vietnam. While its export volumes have declined, its price has been crunched, falling by nearly 14% compared to a year earlier, to be transacted at USDFob119/bdmt in August 2020. 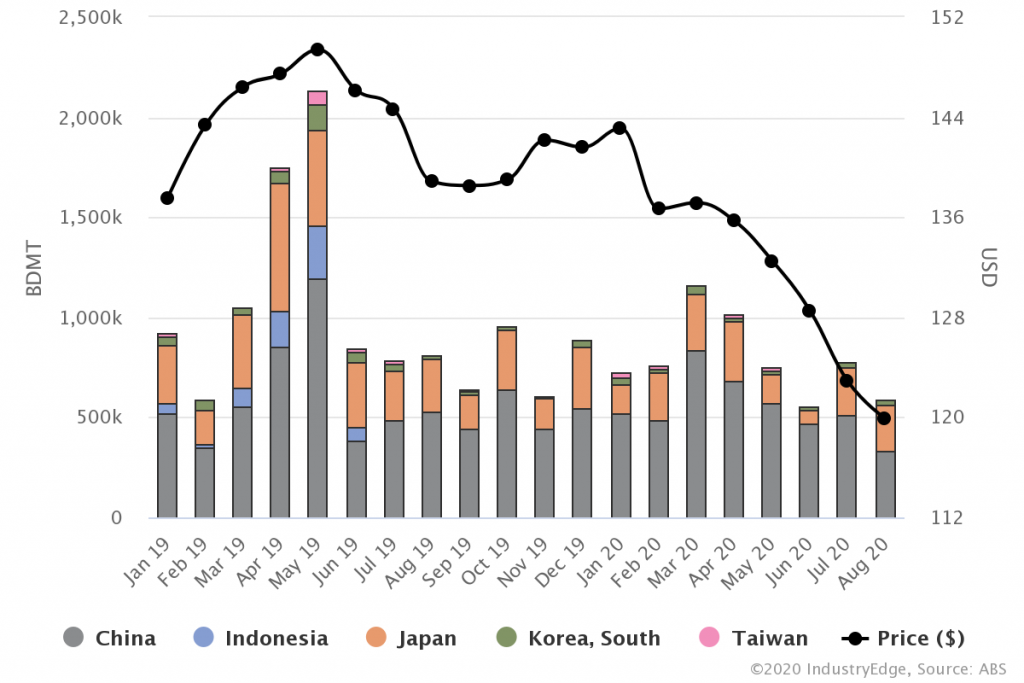 Little wonder that the lower yielding and closer to market Vietnamese Acacia is being preferred in the down market, over the Australian supply.

That is the current situation, and while it may last for a time, it will not last forever.

We continue with our view that woodchip exports from Australia will not recover until early 2021 at the soonest. Australia’s high-quality supply and distance from market, places it behind the cheap and nearby Vietnam for the stock of hardwood supplies required by Chinese and Japanese paper producers for the time being.