Australian ‘Kraft’ paper and board prices continue to climb

Having hit an all-time high in January (AUDFob1,116/t), Australian Kraftliner export prices have barely receded since and remain at historic highs, while export volumes have hardly missed a beat. The situation is similar for Sack Kraft, exports of which are smaller but higher priced. Sack Kraft prices are yet to reach their historic peaks, but are ramping up very quickly, with little prospect of any moderation in an inflationary environment.

That should probably change, as the chart below demonstrates. Kraftliner exports year-ended April 2022 earned Australia a little more than AUD414 million in value-added export income, while the Sack Kraft exports delivered AUD55.5 million. Closing in on a half-billion dollar export trade is nothing to be ignored! 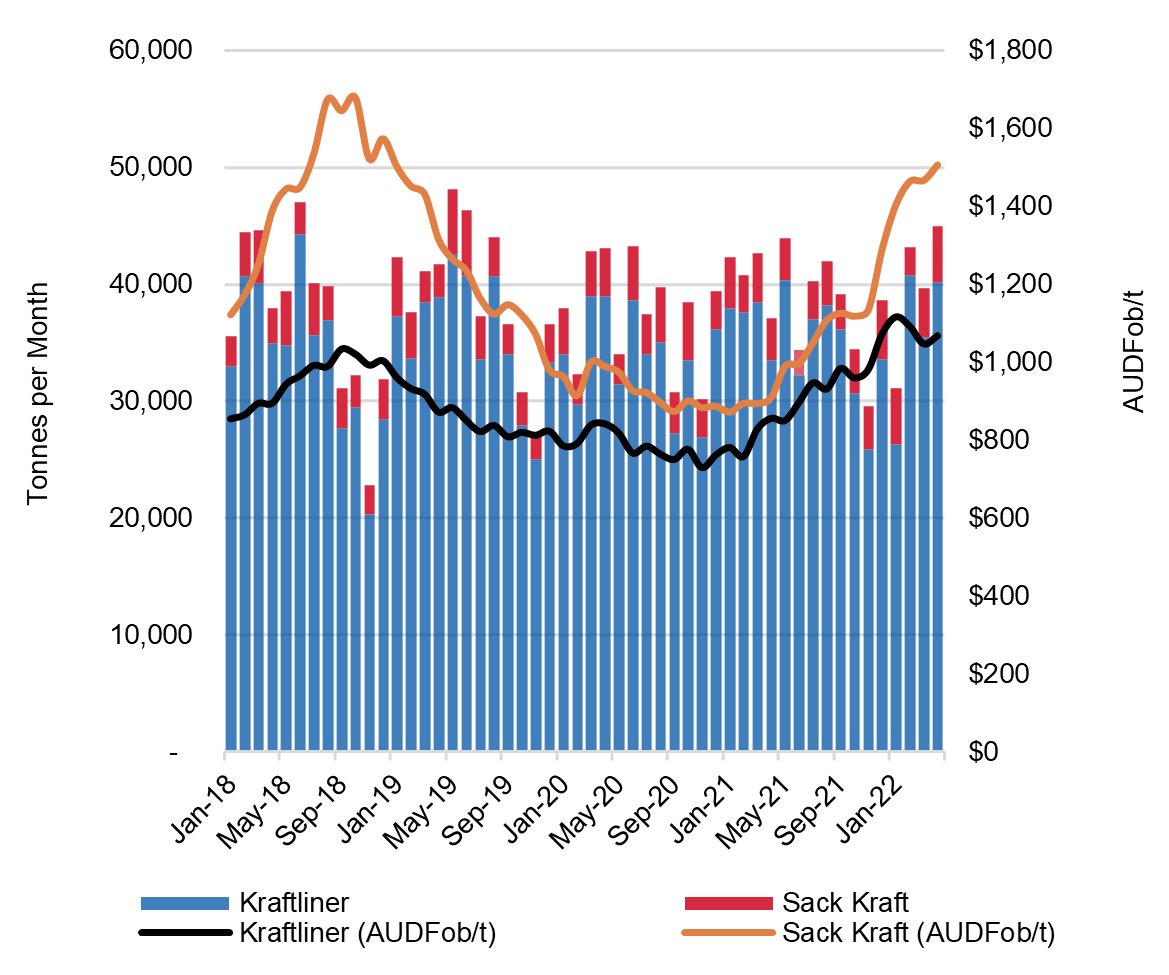 It remains astounding, but Australia’s Kraftliner exports are delivered to around one-third of the world each year. Most years, a little more than sixty countries receive Australian Kraftliner, with the most recent year being no exception.

There is no feasible way to display all the countries, so the chart here shows the top six and ‘Other’. 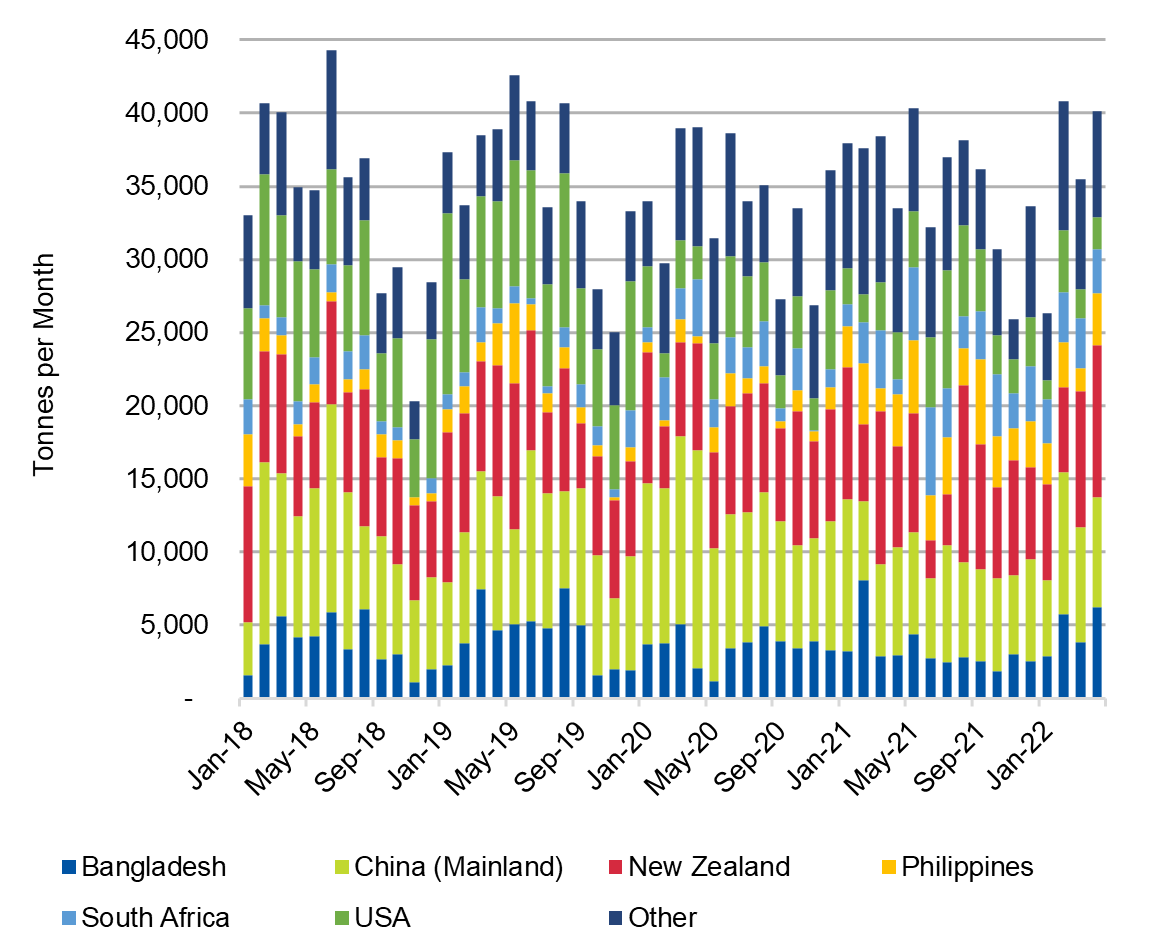 The contrast in main recipient countries is relatively stark: New Zealand on the one hand and Mainland China on the other. The first is largely integrated trade, the latter is part of the pure market play that high quality Kraftliner allows.

Turning to price, at an average AUDFob1,068/t in April 2022, Kraftliner exports are 24.7% higher priced than a year ago, as the table here shows for the main countries.

Unlike Kraftliner, exports of Sack Kraft were stable over the year-ended April, down just 2.5% to 44.7 kt, but with an average price that is roaring up toward record territory. Manufactured at only one facility in Australia, exports of Sack Kraft are essentially limited by production less any local sales. As with Kraftliner, exports make their way around the world, so here presented are the top seven countries and a large ‘Other’ which year-ended April accounted for thirty-eight countries. 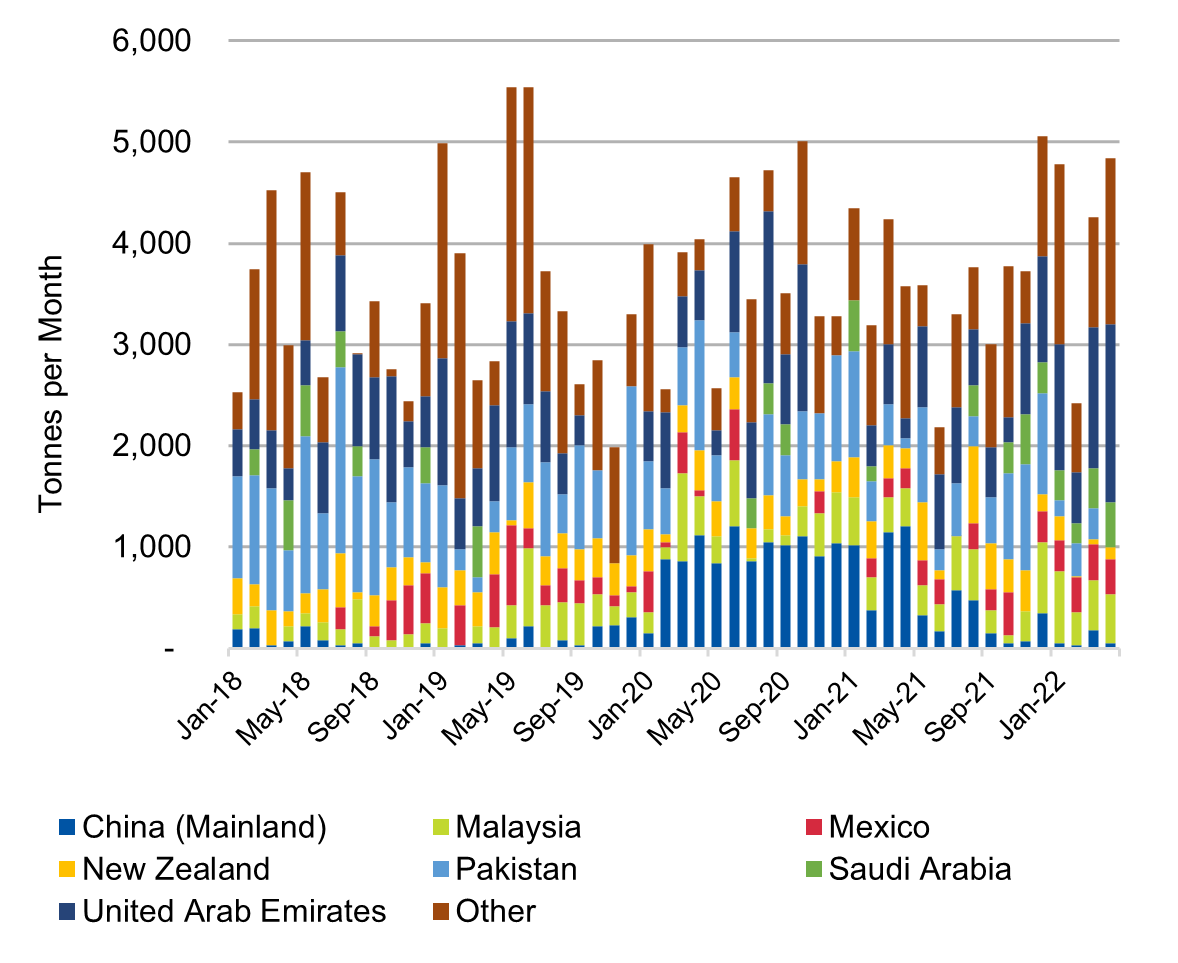 Patterns are a little harder to discern with the Sack Kraft exports than for the Kraftliner trade. However, the Middle-East is a clear stand-out region and one that has proved resilient and lucrative, albeit challenging from time-to-time.

Again, price tells a story. With the exception of New Zealand, where contract pricing is likely dominating, Sack Kraft export prices have exploded over the last year, with the average price from April 2021 to April 2022 lifting a remarkable 65.5%.

Packaging is big business and by price and value especially, for Australia, it is also a growing business.