Are freight costs a feature of the trade war?

Australia’s paper and paperboard imports were valued at AUDFob1.204 billion (AUDCif1.727 billion) over the year-ended April 2019. China, as expected, was the largest single supplier. On an FOB basis, the value of imports from China lifted a strong 9.5% to AUD229.5 million, accounting for 17.6% of the total value of imports.

By contrast, shipments from the USA were valued at 12.0% less than a year earlier, amounting to AUD60.5 million and accounting for 5.0% of the total value of imports. 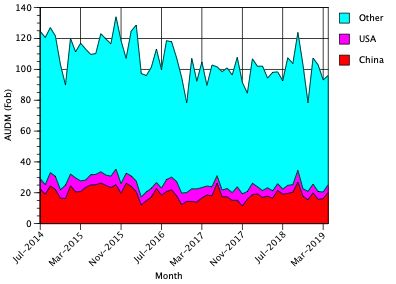 On a value front at least, it seems relatively clear that China grew its position into Australia, at the expense of shipments from the USA.

Could high freight costs work against US importers?

There is a large difference between freight costs for imports to Australia, from each of China and the USA. The gap has been narrowing over the last five years, as the chart below shows. 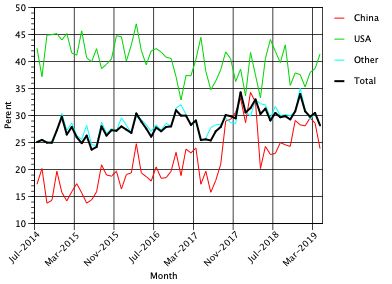 Compared to a year earlier, the total value of imports on a free-on-board (Fob) basis was 1.3% higher, but on a costs-insurance and freight (Cif) or ‘landed’ basis, was 2.2% higher, for the year. That is, the cost of shipping paper and board to Australia rose over the course of the year.

As the table below shows, despite the gap in freight costs between China and the USA contracting over the last few years, the differential expanded over the last year.